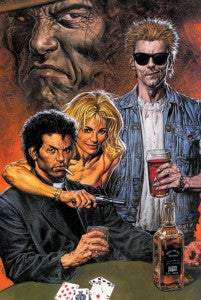 has apparently found its way out of development hell. Badass Digest reports that the long-in-development adaptation of the critically-acclaimed Vertigo title will go to pilot in 2014 at AMC, the network where Robert Kirkman's The Walking Dead has become a Sunday night staple. The network, who have had limited success replacing the critical and ratings successes of the just-finished Breaking Bad and the almost-finished Mad Men, will roll the dice and likely court controversy on a series based on the hit comic book series by Garth Ennis and Steve Dillon, the site reports. Preacher follows the adventures of Jesse Custer, a small-town minister who is possessed by the powers of God when the Big Man Upstairs decides to go on a vacation. The result throws Custer's life into upheaval as he's on the run from cults and the government, flanked by his beautiful-but-damaged ex-girlfriend Tulip and an Irish vampire sidekick. Jesse's endgame is to find and punish God for abandoning His creation so, as you might imagine, the comic book series had its share of detractors and protestors and any adaptation will likely have the same. Preacher could have been a movie as far back as 1998, and after that there was about a decade of various attempts to bring it to the big or small screen. Daredevil director Mark Steven Johnson looked like he was going to bring the series to HBO at one point, but it fell apart. Like The Boys and Y the Last Man, the series faces the dual problems of seemingly having a fairly niche appeal and having a huge, overarching story that makes it difficult to adapt properly. Badass Digest notes that Kevin Smith, currently one of AMC's favorite personalities and the host of Comic Book Men, was instrumental in attempts to get the movie made in the '90s.