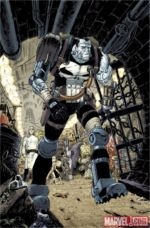 The Punisher #11 saw the death of the Punisher and the first appearance of FrankenCastle. It's no wonder that the issue sold out at the distribution level. Now, Marvel Comics has announced that they will be going back to press for a second printing of Punisher #11. Punisher #11 was writing by Rick Remember with art by Tony Moore. In the story, Daken, son of Wolverine killed Frank Castle. Now, everyone is wondering who or what is FrankenCastle. The issue also features guest appearances by Man-Thing and Morbius. The Punisher #11 Second Printing Variant features a new cover of the interior art of Tony Moore. The Punisher #11 Second Printing Variant is scheduled to arrive in comic book stores on December 23, 2009.