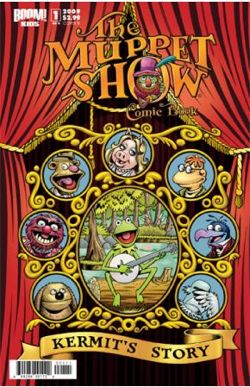 Thanks to the tremendous success of The Muppet Show Comic Book #1, a second printing is on its way. According to the Muppet Newsflash, the comic’s publisher, Boom! Studios, has ordered a second printing of The Muppet Show Comic Book #1, which has become a top seller. Many comic book stores have sold out of the first issue. The second printing is due out in stores later this month. The Muppet Show Comic Book is a four-issue mini-series written and drawn by Roger Langridge. The series will wrap up on June 24th with the spotlight shining brightly on Miss Piggy. While the mini-series has been a financial success, some fans aren’t too happy with the artist’s interpretation of some of the characters, mainly the pigs in the series. “Miss Piggy looks just awful on the covers of her two books,” wrote a fan on the Jim Henson news blog. “Not 're-interpreted in a new way' or anything like that. AWFUL. Fat and ugly.” April ‘09 will see another Muppets mini-series debuting. Thanks in part to the success of The Muppet Show Comic Book, Muppet Robin Hood is a four-part spoof of the legend of Robin Hood. Kermit will play Robin, with the Maiden Marion role going to Miss Piggy. Stoic Sam the Eagle will play Robin Hood archenemy, the Sheriff of Nottingham. Muppet Robin Hood #1 should hit stores on April 29th.

Save Yourself #1 Review: A Magically Surprising Adventure of Strength

There Are Countless Lokis in the MCU