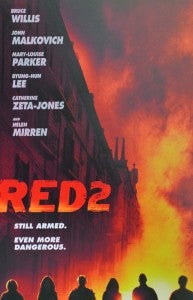 In an interview with MTV News in support of her new film Rock of Ages, Catherine Zeta-Jones praised the RED 2 script as a being a lot of fun and revealed the that film will start filming in September. That will give the studio nearly a year to shoot and prep the film, which is currently slated for an August 3, 2013, release date.

"I play a Russian double agent in RED 2," the actress told MTV News. "I'm very excited to work with such a great ensemble cast like in Rock of Ages. What a cast for me to join. I'm really excited, and the script is so much fun."

She went on to confess that the role is physically demanding and that she's having to work out to keep on top of it. At least she's theoretically about 20 years ahead of her next-youngest co-star!