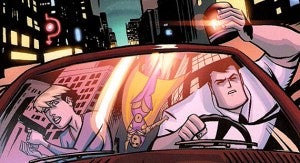 Obscured by other news contained in the same report, a gossip columnist suggests that, for the second time in a year or so, a TV pilot based on Brian Michael Bendis and Michael Avon Oeming's Powers has wrapped filming, been submitted to FX...and met with disapproval. It's hard to say exactly what the odds are that this report is true--it seems unlikely that a project once held in such high regard at the cable network could have been recast, filmed and screened for the network without anyone ever saying anything. Still, that could just be the result of FX being burned on the first pilot, generating a huge amount of buzz and then taking flak from fans when the project was ultimately scrapped. If they made a conscious effort to keep the second one under the radar, anything is possible. According to a report at Latino Review, "Apparently FX filmed their SECOND pilot of Brian Michael Bendis' Powers comics and well, apparently this one doesn't work, either. I don't know if they are going to do a third one or just let it go, but it kind of sucks because that was a show I really wanted to see. On the other hand, it takes place in a world filled with super powered heroes so I was never clear how they could portray that on the budget of a TV show." Of course, the premise of Powers--that it's about specialized law enforcers who do their work in the context of a world where superheroes and supervillains are real and fairly commonplace--isn't all that much different from Marvel's S.H.I.E.L.D., currently in development under Joss Whedon at ABC, as far as the uninitiated are concerned. It could be that with a similar concept fast-tracked at a major network, FX realizes Powers has to be perfect in order to be profitable. Even if that's the case, it doesn't necessarily answer whether they'll take another shot at the property. Certainly after you've spent this  much time, money, effort and energy on a project you'd hate to abandon it, see the rights lapse and perhaps see a competitor make the project a success a few years down the road. At the same time, that time and money is finite and after two failed attempts, patience has to be worn pretty thin among any management at FX who weren't already fans of the project before they wrote the option check. The first Powers pilot was reportedly pretty well-liked by those who saw it...other than the management who had to make the choices. This second pilot, meanwhile, has been a lower-profile project--we never even learned who was starring or that the pilot was shooting--and if it's true that the whole thing was completed and screened without fanfare, that fact alone probably tells fans everything they need to know about the likelihood of ever hearing anything about this from FX again. Neither FX nor Bendis have made any public statements regarding the Latino Review report yet.