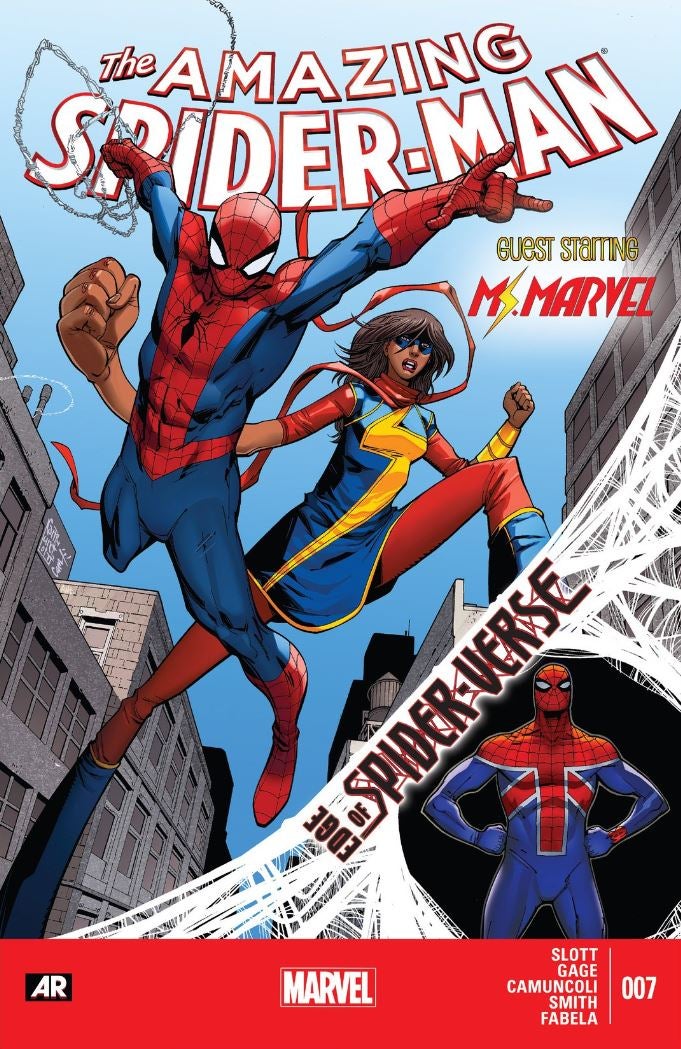 Amazing Spider-Man #7 works as an enjoyable palate cleanser before the inevitable murder and mayhem of Spider-Verse begins in November. The premise is a neat package that pairs Spider-Man along with Ms. Marvel to fight a new supervillain. There's nothing more to it than that, and it excels at being what it is, a simple superhero team up.

Although Slott is still credited with plotting the issue, Christos Gage writes the script. He creates a simple scenario to put Spider-Man and Ms. Marvel together. They both overhear that there is a supervillain running amok in Manhattan and go to help. There's no need for convoluted connections or relationships. It is simply two heroes who happen to go after the same bad guy for completely natural reasons. Gage captures the character of Ms. Marvel very well, playing up her inexperience and love of popular superheroes. It's a natural crossover that fans of both characters should enjoy. The two heroes play off one another very well, cracking wise and kicking butt. Gage's script is refreshing, reading much like a classic Gerry Conway issue. There's also a sequence about Peter's new love interest that is as problematic and unfunny as in previous issues, but it's a very small section of an otherwise simple and engaging story.

Giuseppe Camuncoli's work with Ms. Marvel is a real joy to see. He toys with his presentation of her in order to reflect her shapeshifting powers. He places panels in positions that reflect her warped height or width. She often crosses outside of panel boundaries as she stretches beyond her own standard proportions. Camuncoli has always excelled at exaggerating forms and making the human body more dynamic. This style is a perfect fit for Ms. Marvel and her role in action sequences makes for some moments.

The backup for this issue helps to establish the upcoming Spider-Verse event. It features a Captain Britain and Spider-Man mashup using the resources of the Captain Britain Corps. to discover what is happening across the omniverse. The results are horrifying to say the least. Readers of Edge of Spider-Verse will already be familiar with the mass slaughter of Spider-people taking place, but others will be in for a shock. Slott targets one version of the character that will have many fans ready to take to Twitter in a rage, a form of feedback that the writer must be very familiar with by now. The best part of this B-story is Camuncoli's depictions of a wide variety of alternate universes and costumes. He is able to cut loose and invent some interesting settings and characters. It's a fun backup piece that, while not necessarily being a story, helps to establish what the next big event will be about.

Amazing Spider-Man #7 is a fun double feature. Both the A and the B-story should delight plenty of fans (although the B-story may horrify even more). This is a Spider-Man story at it's least serious in direct juxtaposition to what seems to be the very dark tone of Spider-Verse. For now there's plenty of space for quips, smackdowns, and team ups though and Gage knows how to write a fun-loving webslinger with the best of them.