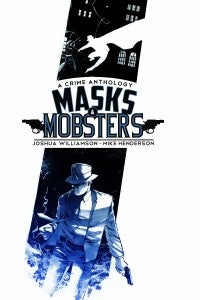 Joshua Williamson, most recently the guy who took over Voodoo from Ron Marz before it was announced as being one of the titles ending in September, has taken his fan-favorite brand of writing to Monkeybrain's digital-only format with Masks & Mobsters, a crime anthology that's first issue revolves around an enforcer tasked to find out who's been selling his boss out to a superhero during the early days of the Golden Age of masked men.

The artist joining Williamson on this journey is Mike Henderson, a creator with a varied resume who hasn't stuck around anywhere for too long, but has made some pretty good impressions anywhere he's been.

It's a short story, and a bloody one--the whole thing takes place in the space of just a few minutes, starting at the end, flashing backwards and then playing itself through past the original starting point. The result is a feeling of whiplash, leaving the reader a little numb after the final, brutal twist. It's an interesting structure that works well with the story, which is a kind of superhero noir that evokes some of the early issues of James Robinson's Starman or Dan Curtis Johnson's Chase.

It's a little puzzling that the series--"a crime anthology"--begins with what's clearly the first part of a wide-angle story that will play out over more than one issue. Perhaps this is setting the stage for the rest of the series, where the basic premise set up here will create the world in which the rest of the Masks & Mobsters takes place. In any event, it's clear that Bobby, our point-of-view character in this issue, is a key player in that world.

The fastest-moving and most exciting issue yet to come out of Monkeybrain and possibly the most enjoyable first issue of the year, Masks & Mobsters leaves you wanting a lot more, and soon. Check it out tomorrow on ComiXology.