The Revolution pilot from NBC is available streaming on their website and Hulu now, giving fans an early look at one of the season's most anticipated new dramas. the big-budget survival thriller stars Giancarlo Esposito, Billy Burke, Zak Orth and an ensemble cast as survivors of a mysterious global event that saps all electrical devices of their function and leaves the world a dangerous shell of its former, industrialized self. The series has huge potential for success; it doesn't feel like the typical, sanitized actioner you get on network television, instead having more in common with The Walking Dead, one of its clear influences in terms of (at least) marketability. That's also a potential problem for the show in terms of survival in the NBC primetime lineup--the brutality is much more immediate than you ever got on something like Heroes, and there were several moments in the pilot where the raw emotion of the characters came through in a way that felt more heartwrenching than entertaining.

It's the cast that carries the day, as the premise is a bit thin and you're not really given enough information to make this post-apocalyptic world believable. The event that occurs is off-camera, but shy of magic it seems unlikely that there's any one thing that could take out not just the electrical grid and the Internet, but things like batteries and cars as well, worldwide. In that way, a show like The Walking Dead is actually more believable than Revolution. Whatever the event was that kick-started the zombie apocalypse, the gradual sweep that the plague takes around the world makes it more believable than to have everything happen in a matter of moments. Still, the strong performances of a great ensemble cast manage to help the story feel "real" in spite of that major shortcoming. It's quite moments like Elizabeth Mitchell watching her young daughter eat ice cream for the last time and just about every word out of the mouth of the terrific Tracy Spiridakos that sell the thing. If there's a weak link, it's Billy Burke, who's a versatile and recognizable TV actor but who always brings more or less the same sensibility to his roles. A familiar face and tone may help to ground the fantastical world of Revolution, which is probably part of what the showrunners were looking for, but it feels a bit out of place and frankly he just doesn't seem at home among the talented cast of mostly-anonymous faces. Burke's big moment of the episode will likely be something that makes him a fan-favorite, but while very well-done, it still just kind of contributes to a sense that he's a guy in a TV show who's somehow stumbled into a group of people experiencing a real-life situation. 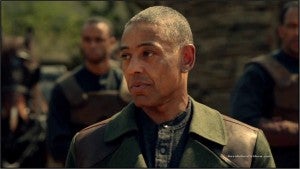 The other thing that grounds the show in reality a bit is a feeling of consequence; there's a bloodbath early on that takes the lives of a number of minor characters and one fairly major one, in the style you'd expect from The Walking Dead. That separates the sci-fi "they kidnapped my family" story from the safe, sanitized variation on the same theme that you get on a show like (the admittedly entertaining) Fallen Skies. There's a longer arc forming around one of the characters--a stray that the traveling portion of our cast picks up along the way. He may or may not be a bad guy--that if we're reading it right could be fascinating--but ultimately unbelievable and a little awkward in the long run. There's quite a bit of fatalist humor here, too--something that fits the show really well and provides levity without clowning. That's an important piece of the puzzle that was likely brought to the pilot by executive producer Jon Favreau, the Iron Man director who helmed the pilot episode of the series. To what extent his influence may be felt beyond this episode, of course, remains to be seen. There's also a return of one of the favorite toys that Abrams and company played with on LOST--very old-school technology acting as the intermediary between our characters and the end of the world. It will be interesting to see how these things eventually pay off, especially as the showrunners have promised that they aren't going to tease the answers to the show's most important questions out over a number of seasons like LOST did. Elizabeth Mitchell, a regular on that series who made her way back here, plays the mother of Spiridakos's character--she's referred to as having died sometime between when the lights went out and the start of the episode, and appears only in flashbacks--but something tells me she'll play a much bigger role than is evident at first blush.

Regal to Screen All 10 Best Picture Nominees, Including Netflix Movies

Dragon Ball Proves Yelling Is One of Acting's Toughest Jobs

Attack on Titan Creator Opens Up About Eren's "Worst Parts"