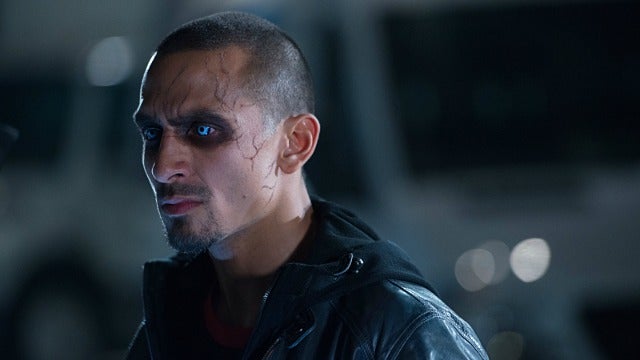 Last night's episode of The Flash was the most packed episode of the season thus far. Even compared to the pilot, it featured more character work, more action, and more plot advancement. A lot happened and it made for a thrilling hour of television.

The episode is divided into two halves that mirror one another. On one side of Central City, there is a hostage situation in the police station. William Tockman (a crossover villain from Arrow) has broken free and taken control of the station with Joe, Iris, and Eddie inside. The cause of Tockman's escape stems from STAR Labs where a metahuman named Farooq has caused a citywide blackout while seeking revenge on Dr. Wells.

With so many moving pieces, it would not be difficult to lose tension or forget characters. However, the two stories are edited together almost perfectly through the episode's center. Stakes are clearly established at the beginning, whether it's something as simple as Tockman's cold-blooded instincts or as complicated as Barry needing to jump start himself in a dangerous manner. There's never any confusion as to what is occurring or what must be done. Every cut between the two stories reflects a change in momentum or increases the stakes. There's never an unnecessary scene used to repeat a point, every one manages to move these games of cat-and-mouse forward. The result is a very engaging and propulsive episode.

The tension in these scenes provides an opportunity for the show's better actors to reveal what they bring to the cast. Jesse Martin as Detective Joe West has been the dominant cast member since the pilot and he shows why The Flash is lucky to have him in a stunning scene appealing to Tockman for the life of his daughter. Tom Cavanagh as Dr. Well's delivers a riveting speech toward the end of the episode as well, one that should excite fans for whatever fate is in store for this occasionally villainous ally of Barry Allen. Even the younger, less experienced cast members like Candice Patton as Iris West deliver better than average performances. The tension and drama present throughout the episode is the metaphorical tide that raises the boats of the entire cast.

"Power Outage" also does an excellent job of humanizing its villains. Previous foes like Weather Wizard and Plastique have been rendered stale by a complete lack of motivation or cardboard acting skills. Farooq, Tockman, and (to a lesser degree) the returning Tony Woodward all provide something to which the audience can relate. It doesn't take much, Farooq's tragic origin and the curse of his powers is enough to make him feel like something more than simply the newest villain of the week. It's disappointing that the writers still treat their antagonists as being largely disposable.

The first thirty-five minutes of "Power Outage" are some of the best to come from the series thus far. It only stumbles as a story in its conclusion after the action has been wrapped up at both STAR Labs and the police department. The writers continue to be obsessed with Barry's potential relationship with Iris and provide another scene between her and The Flash. It is made all the more ineffective by the fact that Barry is clearly hitting on Iris while she is standing outside the hospital room of her own boyfriend. The interaction is borderline disturbing.

There's not a lot of consequences considering the tension and stakes of the episode. Things are still allowed to fall back into the same patterns with only a few minor scratches. Relationships that appear to reach a breaking point are mended and the only characters to be permanently affected are guest stars. Given the high stakes writing that was present throughout most of this episode, it's hard to not feel a little disappointed that the ending reestablishes the status quo. However, everything that led to it is still tightly written and well acted television. "Power Outage" is a strong episode of The Flash, one that reveals how much potential this show contains.