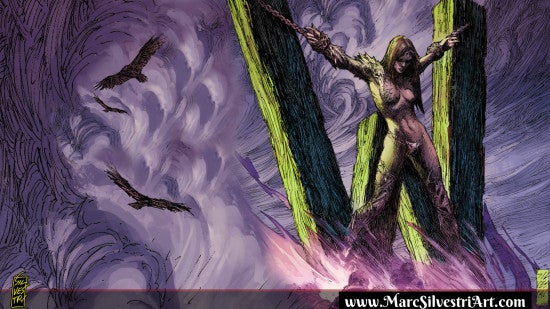 After twenty issues away, longtime Witchblade writer Ron Marz returned to the title this week, with a critically-acclaimed first step in a new direction for lead character Sara Pezzini, in a new setting with a new supporting cast.

It's the second time in less than two years that Pezzini's locale has changed, each time precipitated at least in part by a conflict with her ex-lover Jackie Estacado (better known as The Darkness). This time, though, it's a potentially major tonal shift in the book. Last time around, she left New York for Chicago, but she was still a big-city superhero in a place with a seedy underbelly of organized crime.

Now, she's without The Witchblade (at least for now) and living in Saratoga County in Upstate New York, where there are more cows than gangsters and fewer people living there, according to the most recent U.S. census, than in any single Borough of New York City. 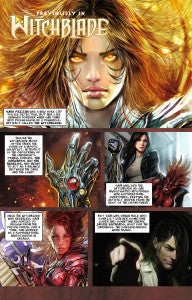 Marz joined ComicBook.com to discuss the changes, the book's future...and how he ended up back with Sara Pezzini again.

Remember that there are spoilers ahead, since this conversation includes a commentary on this month's issue. If you haven't read it yet, go buy it on the Image Comics website, where it's available DRM-free and in a number of file formats, or at your local comic book retailer.

ComicBook.com: Now, first thing's first, because it's hard to miss...Laura Braga's got a very different look and feel than the other artists you've worked with on this title, for the most part, no?

Ron Marz: Laura's style is probably more traditional in terms of linework, rather than something that's fully digitally painted, like Stjepan Sejic. So it's more of a traditional look for the comic, with the color by Betsy Gonia being a separate stage of the process.

ComicBook.com: Was that a conscious effort, in terms of dividing the previous run from this one? I know your disdain for greatest hits tours.

Marz: No, it was simply a question of feeling like Laura was the right person for the book. Everybody really loved her work and felt like she was a good fit for Witchblade. It really didn't have anything to do with whether she had a painted style or not.

ComicBook.com: That said, what made you come back? Did you not have your full say with Sara last time around?

Marz: The simple answer is that Top Cow asked me to come back. I felt like I still had stories to tell about Sara and the Witchblade, so I wanted to tell them. Sometimes when you walk away from a book, you feel like that's all you've got in the tank. With Witchblade, even when I stepped away after issue #150, I felt like I still had something to say. 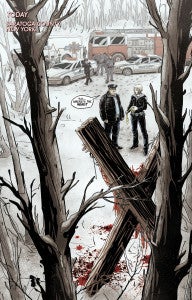 ComicBook.com: Do you think you have another fifty issues in you?

Marz: I don't know what the specific number would be, but I don't think another fifty issues is out of the question. At the very least, I'd like to get the book to issue #200, because I think that's a nice benchmark, especially when there are virtually no titles from the Big Two even in triple digits.

ComicBook.com: So that recap page: Is that all you need to know to come into the new run?

Marz: The recap page is intended to give you the basics of the characters and the concept. It's a primer, not necessarily a recap of everything that's gone before. Issue #170 is written to be as much as a ground-floor read as possible, so hopefully I've managed to work in background information within the issue itself. I feel like comics need to provide entry points for readers, and #170 was designed with that in mind.

ComicBook.com: Just two years ago, the first arc of Artifacts ended and Sara's relationship with Jackie was...well, let's say it was dramatically changed. It seems that relationship's twists and turns has really been key in defining the book the last little while.

Marz: Sara and Jackie Estacado are very much the twin pillars of the Top Cow Universe, and there's a literal love-hate relationship between the two of them. It's a fun, interesting dynamic to write. For better or worse, Sara and Jackie are tied to one another. 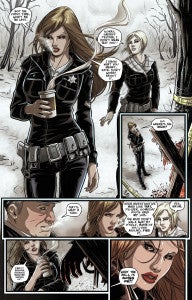 ComicBook.com: Do you think that with the new setting, new cast, new everything taking place just 20 issues after Seeley did something similar, it runs the risk of feeling like the book can't find its footing--that it's always in flux? If so, is that necessarily bad?

Marz: It's a reflection of Sara's character searching for a place to call home, searching for stability. She left New York for Chicago, which is where Tim's run was set, and now events have caused her to move on again. After what she's been through, I think it would actually be more surprising if she stayed in the same place. Witchblade was very New York City-centric for most of its first 150 issues, so I'm glad we have a chance to move around a bit.

ComicBook.com: You know, you've got characters named Kevin and Maguire mentioned in the same panel together. I bet you could get a variant cover out of one of those guys...

Marz: You know, I didn't even realize that until you mentioned it! At least it's two different characters this time, rather than me coming up with the character of Patrick Gleason and not thinking about DC artist Pat Gleason. Apparently, I just have a thing with the Irish.

ComicBook.com: In all seriousness, you've got Sara starting the new series without the Witchblade. And you've got consequences to that on the last page in the form of something that looks very...Darkness-related. Is it just me or is the design of that weapon on Sara's assailant kind of Artifact-y? 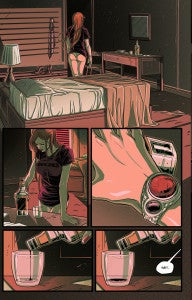 Marz: Oh, it's definitely Artifact-y. But maybe not the Artifact you're thinking of.

ComicBook.com: So are we dealing with a bit of a time-jump here? I can't quite tell whether the "two years ago" sequence happens at the beginning or end of Tim's run.

Marz: The events shown in the flashback sequence happen at the end of Tim's run, fairly soon after events being shown in the Darkness title right now. Part of the reason for putting the story together like this is that we wanted a mystery unfolding in the present, as well as the past, and to show how those mysteries affect one another.

ComicBook.com: That Darkness flashback...was there concern about blowing something that's going on in the other title? Or is there more to it than it seems?

Marz: That storyline was billed right up front in the solicitations as the Death of Jackie Estacado, so I don't think there's any real spoiler effect in that flashback. The story isn't in what happened, but in how it happened, which we haven't revealed yet. It's certainly a pivotal event for Sara, but the story we're telling builds from there, rather than being wholly dependent upon it.

ComicBook.com: In any event, it's a very different starting point, and one that gives you some time to establish the new Sara and her new supporting cast. Was that part of the attraction to going this way, to kind of differentiate it from what you were doing last time around and in Artifacts, at least at first?

Marz: I just didn't feel like there was much sense in repeating the stories and settings we did before. If I was coming back to the book, I wanted to bring something new to it, rather than cover the same ground. And honestly, there's an attraction to just making up a bunch of new characters and situations, and see how Sara fits into it all. One of the reasons I've been so comfortable at Top Cow is that they always let me evolve the characters, rather than perpetrating the illusion of change. This is the next stage of evolution for Sara and the Witchblade.