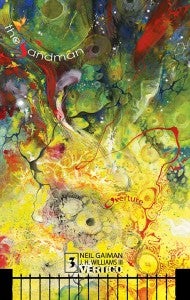 DC Entertainment and Vertigo have released a first look at the cover to April's third issue of Neil Gaiman and J.H. Williams III's hit Sandman: Overture, a prequel to Gaiman's award-winning comic book series Sandman that launched 21 years ago. HitFix has the cover, along with a copy of the issue's solicitation text, which you can see at right and below: "The armies of the night are gathering. The universe is beginning its final dance. Morpheus, far from home, walks the path of madness, accompanied only by himself." The series is a bi-monthly, year-long effort from the acclaimed creators of Sandman, Miracleman, Chase and Batwoman. The second issue will be in stores the second week of February.