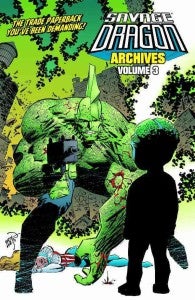 More than six years after the release of Savage Dragon Archives Volume 2, the third volume of black-and-white, archival reprints of the long-running Image Comics series is scheduled for release in January 2014.

In fact, it has been scheduled for January release for a while now, according to Amazon, but writer/artist Erik Larsen confirmed on Facebook yesterday that the deal was finally sealed and the more than 500 pages uploaded to Image.

"Wrapped up Savage Dragon Archives Vol. 3 and it was a long grind," Larsen wrote on Facebook. "You may wonder--what took so damned long? Well, here is but one example. The page on the left is what the original art actually looks like. The page on the right is what I changed it into so that it looks good in print." 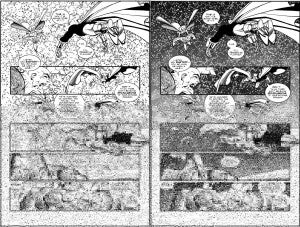 Purists often object in these instances, saying that the comic shouldn't be altered between its original publication and the collection, but it easy to see why it was done: the black-and-white format of the Archives make it a very different animal; it's not about correcting something that was bothering Larsen, but rather about making the presentation more readable and actually more similar to what originally saw print.

Savage Dragon #191 is in stores tomorrow. Check back tomorrow evening or Thursday for a "commentary track"-style interview with Larsen and series editor Gavin Higginbotham.