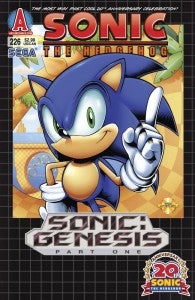 Since 1992, Archie Comics has been releasing Sonic the Hedgehog. That's A LOT of continuity. The series has always been intriguing with excellent art and great stories, utilizing characters from the games and animated series in a melting pot of fanboy goodness. Like any long-running book, that continuity and amount of characters can make things convoluted. That's where the "Genesis" storyline comes in. While DC is getting ready for a line-wide relaunch, Archie comics has set Sonic up for his own reboot. The story opens with a little self-awareness and Sonic running through a very familiar landscape. The issue follows Sonic 1 faithfully for the first two levels. Green Hill and Marble Zone are rendered almost identical to their video game counterparts. Earlier issues of the series tried to convey "zones" and the concepts of the rings, but it's done to more effect here. The freedom fighters make an appearance halfway through, resetting Sonic's cast down closer to its original size. The art is nice, and Sonic's design looks to blend his more recent, taller look with classic pudgy Sonic. Several old baddies make an appearance, and once again, the question is, "Why do tiny animals exist in a world of furries?" What makes the kidnapped animals different from the characters? Irregardless, they fit in with the games' (lack of) logic. Whether or not this reboot was required by Sega who seems to currently be trying to appease Sonic's older fans, this is a nice change. The lingering issue is whether or not it will stick or if it's just another story. As someone who was scared to jump back into Sonic's comics after years of not reading, I was eager to pick this up. I wasn't disappointed. I also really dug the cover's homage to the original game case. If you've always wanted to check out Sonic's comic adventures, or if you know a kid that would benefit from a little comic reading, this is a good place to start.