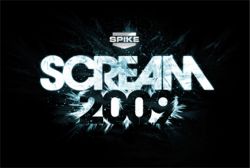 Spike TV's 4th annual Scream show should be on the must-see list for all comic book fans. Scream 2009 is a celebration of all things sci-fi, fantasy, horror and comic book. Scream 2009 tapes on Saturday, October 17 in Los Angeles, California, and the two-hour show will premiere on Spike TV on Tuesday, October 27 at 10:00 PM ET/PT. Spike TV partnered with Comic-Con International in order to present comic book legend Stan Lee with the Comic-Con Icon Award at Scream 2009. Stan Lee is responsible for helping to create super-heroes like Spider-Man, The Fantastic Four, X-Men, Iron Man and The Hulk. The tribute to Stan Lee is being led by Tobey Maguire, who plays Spider-Man in the Spider-Man movie series. In addition to Stan Lee, Scream 2009 will also recognize George Romero, who is considered to be the godfather of the modern horror film. George Romero will receive the Scream Mastermind Award, which honors a filmmaker whose unique vision of horror, science fiction and/or fantasy is both critically-acclaimed and culturally significant. Romero is known for such films as "Night Of The Living Dead,""Dawn Of The Dead," and "Creepshow." Previous winners of the award include Wes Craven, Quentin Tarantino and Robert Rodriguez. Scream 2009 will also pay tribute to year of the vampire by showing World Premiere footage from the highly-anticipated "New Moon." Also, the cast and creators of "True Blood" will be appearing. Scream 2009 will recognize sci-fi with a "Battlestar Galactica" cast reunion for a farewell tribute. The reunion will feature Edward James Olmos, Tricia Helfer, Grace Park, James Callis, Kate Vernon, Katee Sackhoff, Michael Trucco Tahmoh Penikett and executive producer David Eick. Of course, Scream 2009 will also present awards in sixteen different categories. Star Trek leads the list with an amazing seventeen nominations, including the categories of The Ultimate Scream, Best Science Fiction Movie, Best Director, Best Ensemble, Holy Sh*t Scene-of-the-Year and all-new Fight Scene-of-the-Year. On the comic book front, "X-Men Origins: Wolverine" and "Watchmen" are each nominated for thirteen different awards. Fans can go to scream.spike.com until Saturday, October 17 to vote for their favorites nominees.