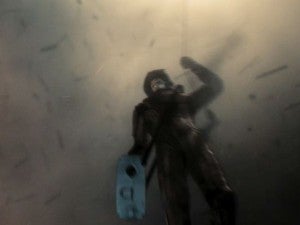 Director J.J. Abrams, whose Star Trek Into Darkness was previewed in IMAX this weekend ahead of select screenings of The Hobbit: An Unexpected Journey, told Digital Spy that he had to be coerced into using 3-D effects on the film, but that he's pleased with how they've come out.

"3D was something that, frankly, I was not a big fan of to begin with," Abrams said. "Essentially in order for us to make this movie, the studio said 'You gotta do this in 3D'. So we said, well, we can do a 2D version that we love that can also be converted to 3D."

The filmmaker went on to address the impression that films shot in 2-D and upconverted end up with 3-D that's not as effective, rejecting the notion and saying that they plan on doing some unexpected things with the latest installment of the Star Trek mythos.

Abrams added: "We have an amazing amount of creative freedom, doing the 3D in post[-production]. This is kind of the myth, that it only looks good if you shoot the movie in 3D, which is completely not true.

"In fact, we're doing a bunch of things with the 3D in this movie that have not been done before, using techniques that have not been seen. All the exterior shots, including the shots in space, are all either shot or rendered in IMAX format.

"It's the first time a movie has been shot in IMAX to this scale and converted to 3D."

Star Trek Into Darkness Director: "3D Was Something That I Was Not A Big Fan Of"