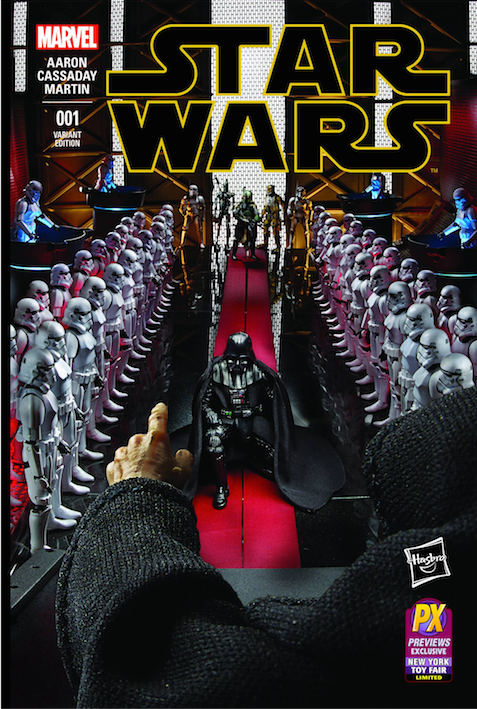 There’s enough variant covers of Marvel’s "Star Wars #1" to fill the entire Death Star with, but this latest one may be our favorite yet.

Diamond Comics Distributors and Hasbro toys unveiled their exclusive Hasbro Previews Exclusive Variant for Star Wars #1, which depicts Emperor Palpatine’s throne room in glorious action figure form. Made completely out of Hasbro’s “Black” line of Star Wars figure, the scene was staged on a scaled throne room set. According to a release from Hasbro, the entire scene was constructed without computer-generated enhancements, meaning that the Hasbro team really did align more than fifty action figures into place for the shoot.

“We wanted to commemorate this event in a very special way,” said Executive Diamond’s Director of Sales, Mike Schimmel, said in a statement. “We had a great concept for the cover, and when we brought it to Hasbro’s Star Wars team, they enthusiastically jumped at the chance to recreate the cover with real action figures. The cover is limited to only 10,000 copies. That may sound like a lot, but it’s peanuts compared to the 1 million total copies Marvel has sold of Star Wars #1.

"Star Wars #1," written by Jason Aaron and illustrated by John Cassaday, hits comic shops on January 15, 2015. The story will will bring readers to the original trilogy’s timeline, in-between the events of A New Hope and The Empire Strikes Back.