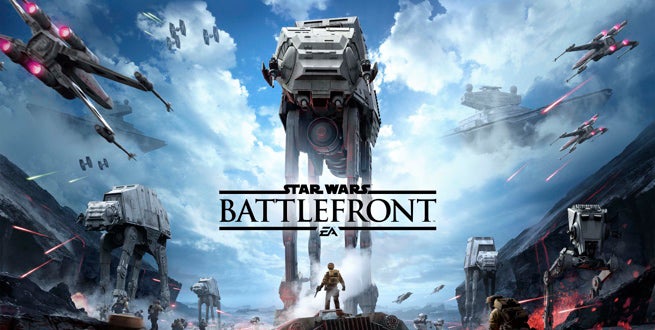 At Star Wars Celebration Anaheim, EA Games came with their new partners Lucasfilm for the first major reveal of Star Wars Battlefront. The game is the first of three announced games from the publisher as the exclusive maker of triple-A console and PC titles in the Star Wars franchise. It kicks off a ten-year contract between the two companies, and if this reveal is any indication, fans are in for a treat. EA announced the release date of the game, November 17, 2015, almost exactly one month prior to The Force Awakens hitting theaters. The official reveal trailer will be released at 10:30am PDT.

At the press-only presentation of the game Thursday at the convention, prior to the public reveal Friday morning, a custom theater was setup like the war room of an intergalactic vessel. Equipped with a screen several hundred inches in diagonal and a Dolby ATMOS 3D surround system, after a countdown ticked down from one minute, the presentation jumped right into gameplay. Recorded directly from a PlayStation 4 build, the gameplay panned up into the forests of the moon of Endor. The camera puts you into the point of view of a Rebel Alliance soldier, and introduces you quickly to other members of your squad. When a couple of stormtroopers come zooming by on speeder bikes, it's on. 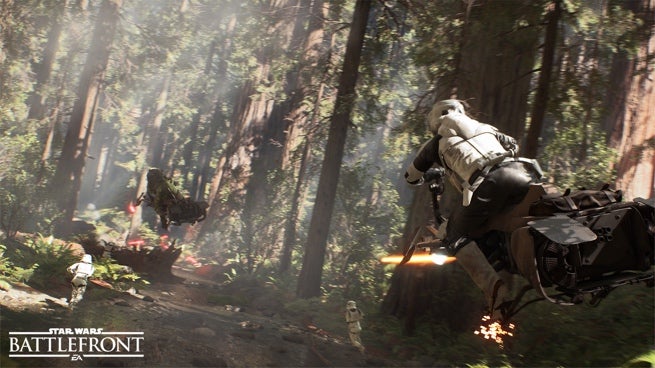 The battle is incredibly fast paced as you roam through the dense forests, constantly communicating with your fellow squad members. In-game voices continue to talk with each other, and react to situations realistically. If you turn the corner and meet face-to-face with a stormtrooper, he will shout out "They're over here!" or otherwise call to his fellow soldiers. In the fifteen-minute gameplay exclusively revealed at the show, we saw many of the scenes from the trailer played out in full effect. One Rebel had a jet pack. Players on the Stormtrooper side of things (this was a large-scale multiplayer battle in a game mode called Walker Assault) controlled AT-STs and an AT-AT. There are power-ups throughout the battlefield, with the first couple found being simple things like a personal shield or a rocket launcher – though there are considerably advanced ones teased for later. 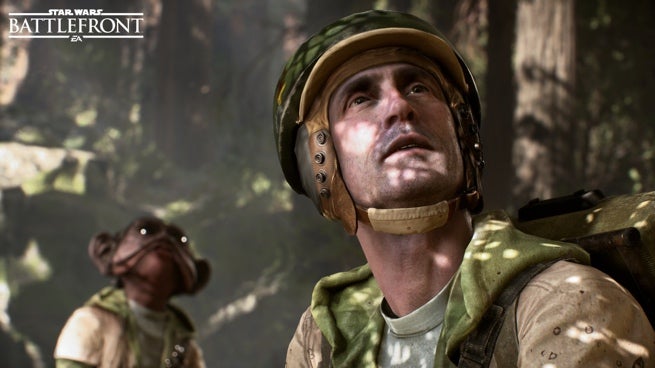 The gameplay demo ended with the player-controlled Rebel getting to a communication post, and calling in a Y-Wing bomber strike on the AT-AT, taking the massive walker down. Retreating to a familiar looking bunker on the moon, the Rebel squad turned down a hallway when one of them was suddenly hurled into the air, grasping at his neck. A few iconic breaths later, Darth Vader emerged from the shadows, easily deflecting blaster shots and slashing out at the player with his crimson lightsaber. 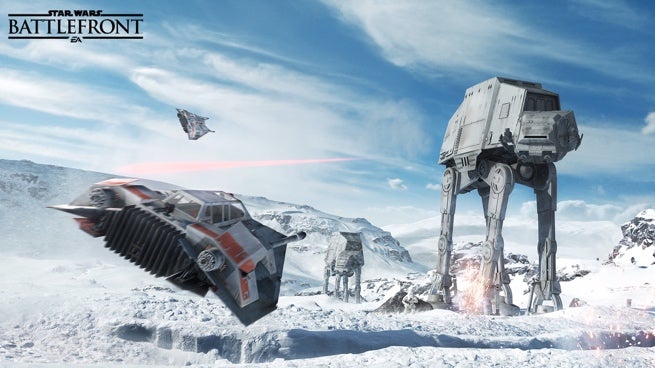 After the gameplay was shown, Ada Duan, VP of Lucasfilm Digital Business, and Niklas Fegraeus, Design Director at DICE, the development house for the EA Game, talked more about what fans can expect, while providing an in-depth behind-the-scenes look at the game.

Duan promised they have one simple goal in their 10-year deal with EA: "We want to make the best Star Wars games ever," she stated definitively. The "deep partnership" they've built with EA has allowed them unprecedented access to Lucasfilm.

Visiting the Lucasfilm Archives, where most of the original props, models, and costumes reside deep within Skywalker Ranch, was an experience Fegraeus really geeked out over when talking about it. What's important for gamers, though, is what they were able to do to make Battlefront incredibly authentic. Using a relatively new technology called Photogrammetry, they took actual props and models from the films: things like Han's blaster, Vader's mask, original AT-AT and AT-ST models, and on and on, and took hundreds of pictures of each, from every conceivable angle. Using these, they created 3-D digital composites that would serve as the actual in-game models. Thanks to the power of modern consoles and PCs, Fegraeus said this all means "when you play with the game and pick up a blaster, or a lightsaber, or climb into a walker or an X-Wing, you're not just doing those things with an artist's approximation; you're playing with the real thing." 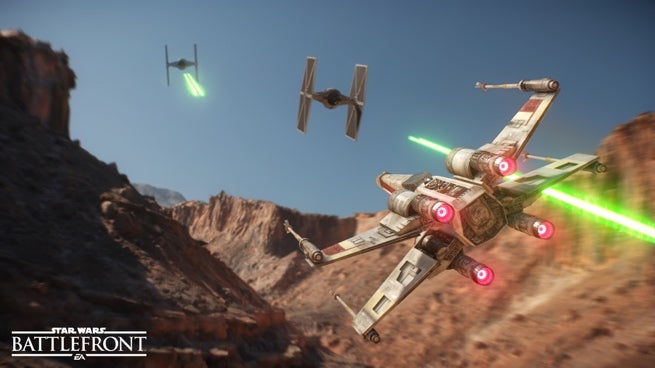 They didn't stop there, though, as they also used Physically Based Rendering to pull in the original, real filming locations for places from the films like Endor, Hoth, Tattooine, and even the upcoming The Force Awakens location of Jakku (more on that in a moment). At these locations, they once again broke out the cameras and captured every inch they could, importing them directly into the game as environments. The reason their Endor looks so much like the one in Return of the Jedi is because it is the exact same one, digitally imported from the real world into the game world.

For console gamers, high-end digital surround sound is here, but PC gamers get an added immersive boost, courtesy of Dolby's latest technology, ATMOS 3D surround sound. The technology (paired with great speakers and a capable receiver, of course), truly simulates sound coming from every angle of the room – when the AT-AT's foot slammed down, you heard the creaking of the joints from above and the deafening smash vibrating from all around you. 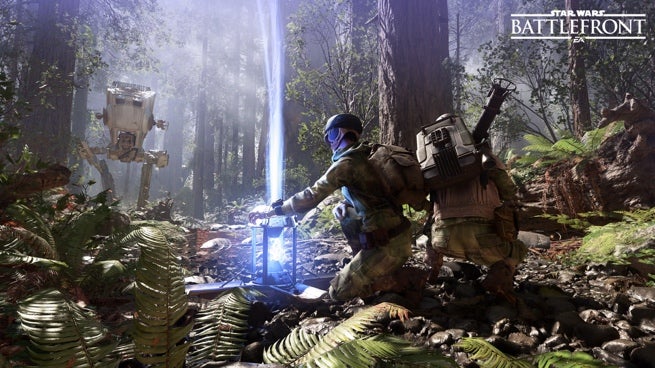 As for the gameplay itself, Fegraeus said, "Star Wars is epic battles," and that's what they're delivering. Players can choose first or third person, and switch between the two cameras With various multiplayer modes, fans can build their own battles, as if they're playing with their own toys in a toy box that happens to be ripped right out of the films they love. The battles are punctuated by those power-ups we mentioned before. They don't just bring you better weaponry or temporary defenses, they'll also unlock vehicles from speeders to walkers, and in dogfight between X-Wings and TIE fighters, they'll unlock advanced vehicles like the Millennium Falcon and others. As for Vader's appearance, that's indicative of what they're calling "Player-driven boss fights." When a player finds a power-up that unlocks a Hero or Villain character, they'll transform into that character, becoming a very difficult and very powerful player that others can team-up against. 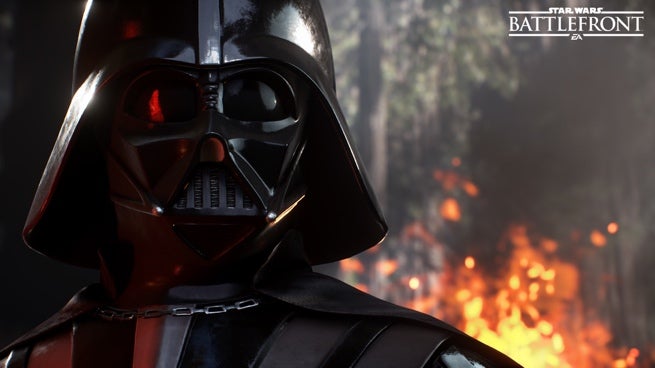 Of course, players also want to play the actual, original battles from the films. These will play out in Battlefront Missions, a story-driven mode. In these missions, players can fight in iconic scenes from Star Wars history alone or in co-op. That co-op can be played in local splitscreen or online, as well. The only mission they announced by name was a surprise, and one that has not been in any films – yet. The Battle of Jakku will let players chase down some Imperial remnants shortly after the Battle of Endor at the end of Return of the Jedi. Jakku, of course, is the new desert planet revealed in The Force Awakens. That particular mission will be DLC, but will be released for free to everyone who buys the game, on December 1 if you pre-order, or December 8 if not.

All told, the excitement of the team, and of the other press in the presentation, was clear, and it looks like the Lucasfilm/EA partnership is off to a great start. With new online features, stories that tie together major films, offline missions alongside the massive online battles, and meticulously recreated props, vehicles, and locations, this looks to be the Star Wars game we're all looking for.