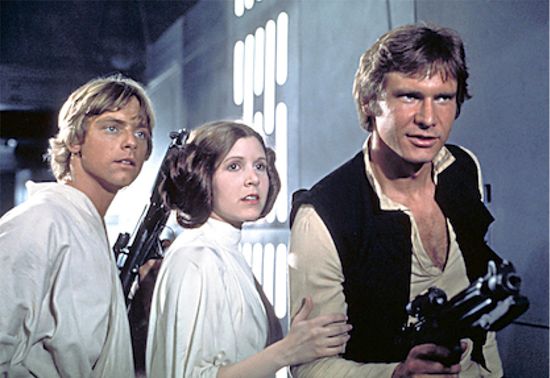 We’ve been down this road in the past. Before every big event, a multitude of people claim “inside sources” have revealed that Disney is about to make a big announcement in regards to Star Wars Episode VII. 2013 San Diego Comic Con, 2013 Disney D23, the anniversary of the Disney acquisition of Lucasfilm, and a couple other smaller events were all supposed to bring huge, surprise Star Wars Episode VII announcements.

However, no announcements ever came. The latest rumor circulating the Internet is that a big Star Wars Episode VII casting announcement will take place on May 4, 2014. There is a lot of compelling evidence to support this rumor.

May 4th is considered a holiday by Star Wars fans. It was chosen as a great day to celebrate the franchise, because of how similar "May the 4th" sounds to the Star Wars phrase "May the Force be with you."

Disney seems to be making a big deal out of May 4th this year. Lucasfilm is teaming up with TV shows like The Big Bang Theory and The Goldbergs for special Star Wars Day episodes, and Disney Stores are celebrating May 4th with in-store events and exclusive Star Wars merchandise.

Most importantly, Star Wars has apparently already started filming some scenes, so it’s likely the cast will be arriving soon. Recent reports have suggested that Peter Mayhew has pulled out of some upcoming comic book convention appearances, because he will soon be filming Star Wars Episode VII.

Once filming kicks off with the main stars, it will become obvious who is involved in the film, and if Disney doesn’t want the press to make the announcement, then it would seem likely that they would make an official announcement soon.

Right now, it’s all just rumors and speculation, which have proven to be wrong in the past. That being said, it really does make a lot of sense that May 4th would be the date that Disney makes an official cast announcement. However, May 4th falls on a Sunday this year, so it might also make sense for Disney to make an announcement sometime during the upcoming work week in advance of May 4th.

Sharksploitation Documentary to Chronicle Impact of Sharks in Horror Films

What If…? Episode Count: Marvel Studios Series Will Air Nine Episodes Instead of Ten