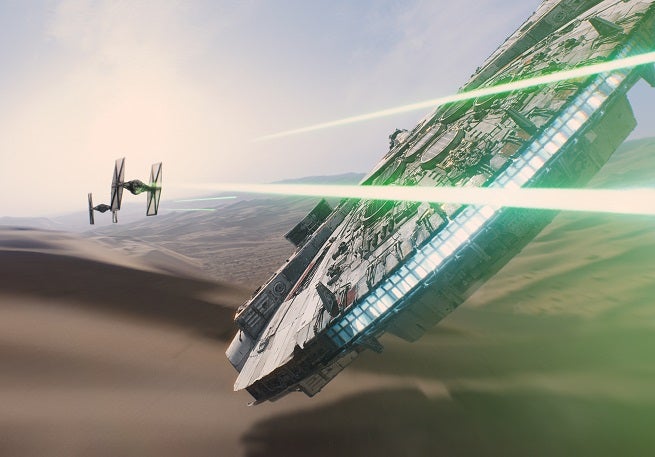 The first trailer for Star Wars: The Force Awakens finally arrived on Friday. We've broken down all the major points from the trailer below.

"There's been an awakening," says an unseen narrator at the beginning of the trailer, before anyone is seen on camera. "Have you felt it?"

While fans spent all day speculating that the voice was Benedict Cumberbatch, having secretly done something in motion capture for the film, HitFix reports that it's actually the KING of motion capture: Andy Serkis of The Hobbit and Avengers: Age of Ultron. Whether he's playing a CG/motion capture character as he did in Lord of the Rings or a live-action character as he will in Avengers is anybody's guess.

A different look than the prequels

It's likely not accidental that nearly everything that appears onscreen in this teaser trailer is something you probably wouldn't have seen in the prequel trilogy.

Without actually doing any disservice to those films, Abrams seems to have acknowledged that the universe of Star Wars looks better when it's a little...used. Everything was shiny and new in the prequels -- and it made sense; all that stuff that was 20 years old and showing its age in the original trilogy had just been bought and trotted out. The "used universe" look that the Star Wars Rebels crew kept talking about in interviews wasn't yet used at that point. Now, though? It's been used for twice as long and pretty rough. And mostly, it shows. 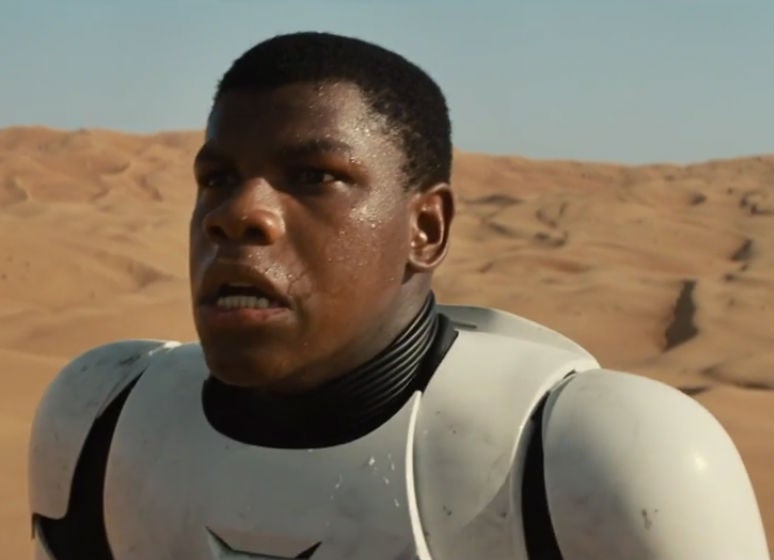 Who do we meet?

The first people we see in the trailer are John Boyega and Daisy Ridey -- meaning that it's a person of color and a woman who are the first faces of the new Star Wars. While neither were totally absent from the original trilogy, certainly a lack of diversity among lead characters is something that had been discussed in the run-up to the new movie, and when the cast was announced it was commented-upon that they'd cast a different-looking cast than previous Star Wars films.

And of course, Boyega is wearing a Stormtrooper uniform, which begs the question: whose side is he on? Apparently there has been some talk that he might be an Imperial deserter. If he just escaped somebody, that could explain the sweat and panic.

The one Boyega is wearing, and others seen in the trailer, are different from the ones we've seen before. The designs are less boxy and the helmets somewhat less tubular. All in all, they're slimmed down and more classically militaristic. It melds the sleek look of the prequels with the somewhat anachronistic look of the original trilogy effectively, essentially applying the "newness" and slimmed-down aesthetic of the prequels to iconic imagery from the Star Wars trilogy.

Next, we see this cute little soccer ball droid making his merry, gyroscopic way through what looks to be Tattooine, the world where Luke and Anakin Skywalker both grew up.

What's the deal with all the gyroscopes this year?

You can read more on the droid at the link above (where it says "soccer ball droid"), but tl;dr is that it looks like a next-gen R2 unit in a lot of ways, and the headpiece and sound effects certainly appear to back that up.

Where are the Stormtroopers going?

We get a company of Stormtroopers about to step out of a hatch into...well, we have no clue. They intentionally obscure anything that might help us speculate. If we want to make a totally wild and probably-accurate guess, though? We'd guess it's Tattooine (or whatever desert planet Boyega's character is on), where they're looking for a guy wearing a Stormtrooper uniform.

Daisy Ridley, who might be named Kira in the film, rushes off somewhere on a speeder. It looks to have elements of the traditional Star Wars landspeeder (including the color -- could this be repurposed from parts of Luke's? That's probably a stretch...but it would establish her as an Anakin Skywalker-style tinkerer) and of the speederbikes from Return of the Jedi. In any event, she's rumored to be the Luke Skywalker-type character in the film -- a relative innocent drawn into the conflict.

Also, her goggles will be popular with cosplayers; they look a bit like the lenses came out of a Stormtrooper helmet.

Then we get Oscar Isaac, who is dressed in Rebel garb and flying an X-Wing. He, too, seems pretty stressed, although it's difficult to say whether he's running from something, or chasing something. He seems to have at least part of a squadron with him as they skim the water on a planet with too much water to believably be Tattooine.

He does look like he might have a bruise on his right cheek, but it's hard to say whether that's just the way the light is reflecting through his visor.

A lot has been made not only of how much of this stuff was shot in practical environments, but in the way environment is used in the film. The water splashing up and blowing around the X-wings, the contrails coming behind the Millennium Falcon in later shots, the mist, the sweat in the desert...it all feels like a film where there are phsyical objects reacting with an environment, something that is lost with many CG-heavy films including, some would say, the Star Wars prequels.

Serkis' narration returns briefly near the end of the trailer to spell some stuff out for us, saying "The Dark Side..." as this new character, widely assumed to be Adam Driver's Sith, appears onscreen with his fancy lightsaber.

There's something really interesting about the fiery, jagged way his lightsaber presents itself: the Empire has always been fairly fascist, and so the clean and orderly look of its adherents always made a kind of sense. Here, we get a stooping, stumbling, harried character in a natural environment with this ragged, jagged sword. This is a very different kind of Imperial and a very different kind of Sith from what we're used to.

Is that a creative choice? Do they want us to overthink it like that? or will we just find out that this particular Sith had to build or rebuild his lightsaber in a hurry?

As the last life form we see onscreen, this also establishes that the original cast don't appear in this trailer, focusing instead exclusively on the new characters (we assume Han is probably flying the Falcon, but he's not visible).

After some ominous music, some darkness and some silence, we get the classic Star Wars fanfare, accompanying the Millennium Falcon as it squares off with some TIE Fighters. The Falcon is fairly pristine, in good shape and it seems that some parts have been replaced. The radar dish destroyed during its escape from the second Death Star has been replaced, trading in a round one for square; some have observed that the propulsion system seems to have been upgraded. It shouldn't be suprising, all these years later, that it's seen some upgrades...but being clean and well-maintained feels like a man who isn't smuggling and running from the Empire anymore. Could Luke, Han and Leia have been living fairly charmed lives, in spite of the fact that the Empire doesn't seem to have ever completely fallen? Could it be that as the Empire had to rely more on brute strength and less on Sith Lords, the Skywalker family are no longer a major concern to the current leaders of the government?

Or perhaps, tying with the previous observation, the order/chaos metaphor has flipped and the clean, shiny Falcon is supposed to offset the jagged, seemingly-dangerous lightsaber.

In any event, you'll notice that the Falcon doesn't take off into space. Not only does that mean that the new Star Wars trailer takes place entirely on-world(s), but could it suggest that wherever this dogfight is happening, it's where the pilots of the Falcon need to be? Either their home, or a place they're defending? Could there be a reason it's not just going into hyperspace to avoid the attacks from the TIE Fighters?

Yes, the logo. It cements that they're not using the Episode VII in the title, which again feels like a throwback to the original trilogy. Back then, the "Episode XX" in front of the subtitles only came in the crawl at the start of the film, not in any official logo. The Episode numbers were added in as part of the official title treatment with the prequels, arguably to differentiate them from the sequels, since watching them in release order would be confusing.

Star Wars: The Force Awakens - Breaking Down the Teaser Trailer