Today, Melissa Benoist joined the ranks of those who have portrayed Supergirl in live action, as the costume from the hugely-anticipated CBS pilot based on the character hit the Internet.

And while there haven't been very many live-action iterations of the character over the years, Supergirl is someone who has changed outfits more times than most superheroes. So...where did they come up with the inspiration for the look they eventually settled on?

Well, first of all, let's say this: the blue top with a red skirt, cape and boots and yellow details including a belt is pretty much par for the course for Kara Zor-El. That's been the basis of her outfit almost since her inception, although occasionally she's drifted into blue skirts or what-have-you.

The stockings are...well, I'm not sure we've ever seen stockings on Supergirl. That's not a bad addition, though, especially becuase with the fairly short skirt we'll be having discussions about modesty as the pilot draws near, surely.

But...where have we seen some of these components before? 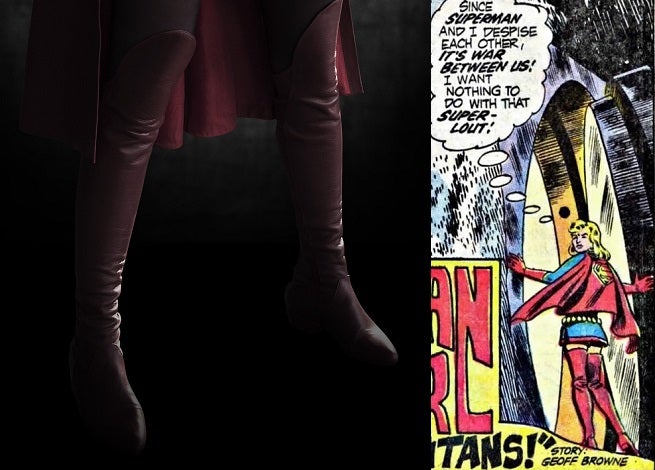 I'm not sure we've ever seen THIS EXACT pair of boots, but while Supergirl's boots are fairly high, they're usually not up over the knee.

There are a pair of thigh-high boots that she used to use occasionally during the Silver/Bronze Ages, probably best-illustrated in Action Comics #402, "Supergirl vs. Superman."

This costume came during a period when Supergirl was changing pretty regularly and they even had a reader contest to redesign the character, so it's sometimes hard to get a decent shot of ANY costume from that period. That said, other than the boots, it looks like there isn't much in common with the new suit. 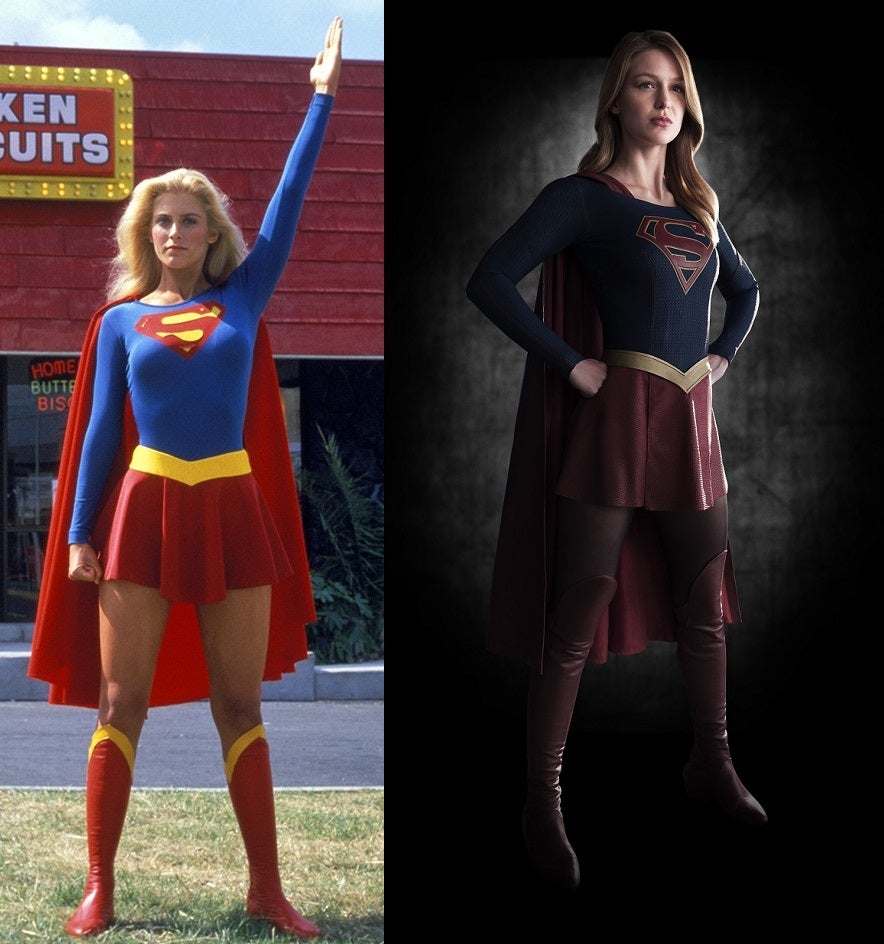 The downward-facing yellow "V" shape on the belt has been a staple of the character since the Helen Slater movie in the '80s, which seems to be where a costume closely resembling the Benoist look first debuted.

In the comics, it first appeared before that -- but only very, very briefly on a gown she wore for a date (which, yes, was blue and had the "S" sigil on it), as caught by Metropolis Plus. The belt appeared following the film on the version of the costume she wore in Crisis on Infinite Earths, which will be back in comics in a couple of months for Convergence, of course.

The look of Benoist, aside from the muted colors, appears to be drawing a good deal of inspiration from the Slater suit and its comics corollary, the post-Crisis on Infinite Earths "Matrix" version of Supergirl, who had the downward-facing yellow belt between her top and skirt, a skirt roughly the same length as the one seen in the movie and a more square neckline (similar to Superman's) than seen in the movie costume. 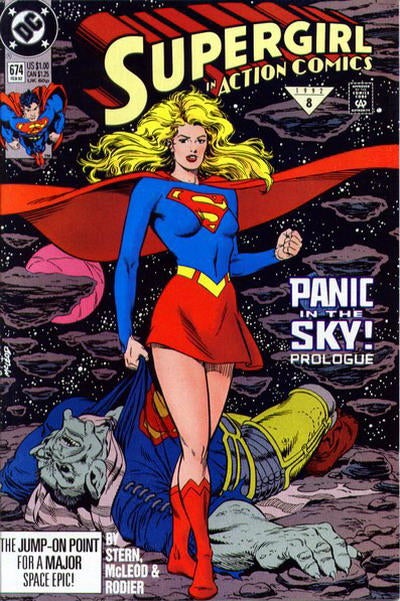 That outfit lasted for a fair amount of time and was the ensemble of choice during the Roger Stern-penned Supergirl series that came out following the events of the Death and Return of Superman.

It also featured the then-standard Superman S with the more dramatic tail, rather than the more traditionally S-shaped with few serifs, which is the standard now for Superman in the comics. It is less bulbous than the tail of that era, though, and more squared off.

Notably, the current Supergirl logo wasn't used, and this costume bears almost no resemblance to the New 52 iteration.

The biggest difference, aside from her legs getting more coverage, between the Slater/Matrix costume and the Benoist suit is the S-shield itself. Instead of being a carbon copy of Superman's, we get one that's outlined in yellow against a blue field. The field inside the pentagon and behind the "S"-shaped logo, then, isn't part of whatever Kryptonian symbology makes the logo work and further, we have a darker-colored background for the shield.

The outlining of the logo and sharing a color field with the top is common the Supergirl merchandise more than it is to Supergirl in the comics (although some variations on the supergirl costume have indeed avoided the yellow background field). 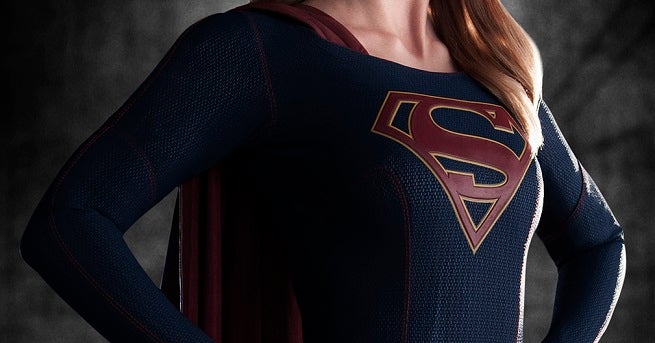 The top is textured in such a way that it will bring out the inevitable comparisons to Man of Steel, but really it looks more like The Flash to me. There are the New 52-style random seams (adding a strain of red that runs through the blue on her costume) and it definitely looks more like some kind of cloth than latex or leather to me. Same with the skirt. It definitely doesn't give the same sense of something very alien that Superman's sometimes does.

Supergirl: A Closer Look at The Costume