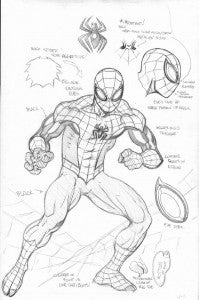 After weeks of hyping amazing, spectacular, (web of) earth-shaking, controversial change to Spider-Man, Superior Spider-Man writer Dan Slott seems to have leaked the identity of the Marvel NOW! title's anonymous hero in a tweet meant to be eyes-only for series artist Ryan Stegman.

Unless of course he was just messing with the fans.

Okay, so it's probably the latter; it's not as though Dan Slott is exactly unaware of the way Twitter works.

Potential spoilers beyond this point, though, so don't blame us if it turns out to be true.

In any case, the writer composed a tweet a few days ago that has (finally) caught the attention of the comics press. Partly because it was deleted at some point between when he made it and when it started being reported earlier tonight, which tends to lend it just a bit more credibility than if it were still up and active.

The tweet appears to refer to Spider-Man as "Miguel," something that caught the eye of fans online who already suspected that this new Superior Spider-Man could be Miguel O'Hara, the star of the long-since-cancelled Spider-Man 2099 by Peter David and Rick Leonardi. Slott has written the character before--in the 2010 video game Spider-Man: Shattered Dimensions.

A number of fans online had speculated that O'Hara might be the character, given the clawlike barbs on the ends of his fingers.

A screen grab of the tweet itself is below; Bleeding Cool was among the sites that reprinted a version of the tweet with the spoilery bits blacked out, and they say they got no response from Slott and a stock "Keep reading..." response from Marvel PR.

Asked about the return of this particular character back in August, though, Marvel's Ryan Penagos had the following to say:

“Fan asked if we’ve ever considered bringing back Spider-Man 2099. Wacker says ‘YES!’ There’ve been several email chains. Stay tuned. That could mean something or nothing, so don’t go all internetting on things.”

Superior Spider-Man: Spoiled, or Is Slott Screwing With Us?