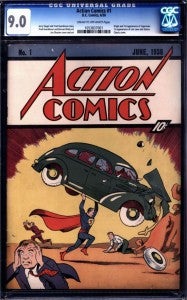 Earlier this week Comicbook.com reported on the Top 10 Most Valuable Comic Books, and now there is a new record. Just moments ago, a copy of Action Comics #1 with a CGC grade of 9.0 sold on Comicconnect.com for $2,161,000. Published in 1938, Action Comics #1 features the first appearance of Superman, who was created by Jerry Siegel and Joe Shuster.

The previous record was a copy of Action Comics #1 with a CGC grade of 8.5 which sold in March 2010 for $1.5 million. Many thought the $1.5 million record would stand for a long time, but that was before this higher grade copy emerged.

The higher grade copy once belonged to actor Nicolas Cage, and was believed gone forever until it was found in a storage auction.