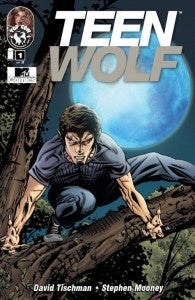 Top Cow Productions is teaming up with MTV Comics to produce a Teen Wolf comic book. The comic series is based on MTV's Teen Wolf TV show. The Teen Wolf comic series is planned as a three issue mini-series and will be released in both comic book stores and on digital platforms. The Teen Wolf comic series is written by David Tischman with art by Stephen Mooney and covers by Joe Corroney. "Teen Wolf reimagines the worn-out werewolf genre, and turns it into a modern story of horror and hot love," said writer David Tischman. "The scripts are so smart, and I worked with [showrunner] Jeff Davis to keep the same scary horror we see each week on the show; the personal horror of Scott dealing with being a werewolf, and the predatory horror of the werewolf culture. But I also really wanted to focus on the relationship moments between Scott and Allison. In those scenes, I think everybody remembers what that first love was like -- the scary, gut-wrenching "does she like me?" and "can I touch that?" moments we all have growing up. The book's been a lot of fun to write, and I can't wait to see what Jeff comes up with for Season 2." Teen Wolf tells the story of Scott McCall, who is the co-captain of the Beacon Hills High Lacrosse Team and has a hot girlfriend named Allison. But Scott also was bitten by a werewolf, so every time he gets excited, he undergoes a startling transformation. To make matters worse, Allison's father is leading a group of hunters who want Scott dead. Teen Wolf: Bite Me #1 is scheduled to go on sale in stores on September 21, 2011. There will be a limited photo variant cover at participating retailers.