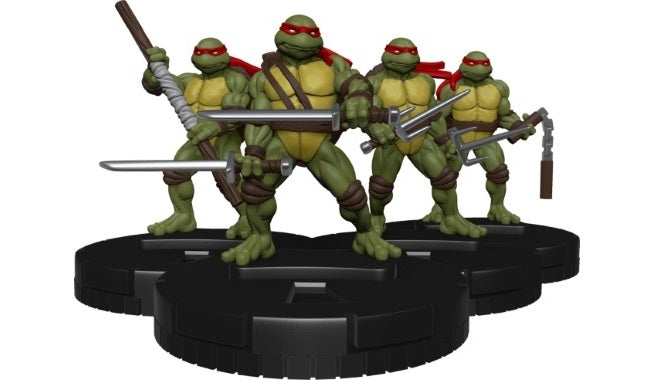 The Teenage Mutant Ninja Turtles are officially coming to HeroClix and Dice Masters. WizKids Games announced a new partnership with Nintendo that will see the company produce mutltiple tabletop games based on the Turtles, including a special series of HeroClix figures and TMNT Dice Masters game, both set to release later in 2015.

WizKids says that all versions of Kevin Eastman and Peter Laird's classic creations will be represented in the WizKids game line, including the classic and modern comics and animated series.

"The Teenage Mutant Ninja Turtles are classic and beloved characters, and we can't wait to see them integrated into WizKids' tabletop games," said Manuel Torres, Senior Vice President, Global Toys and Publishing, Nickelodeon. "We are as excited as our fans are to see Leonardo, Michelangelo, Raphael, Donatello, Shredder and more come to life in HeroClix and Dice Masters."

Teenage Mutant Ninja Turtles HeroClix have been one of the most frequently asked for products by fans of the game. Hearing that Turtles HeroClix and Dice Masters should make many fans very happy.