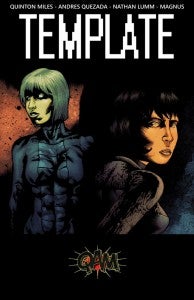 The first trade of Template will collect issues 1-8 of the series in a 104-page, full-color trade paperback edition. The entire series to date can be read in weekly chapters for free on QAMCOMICS.COM or can be purchased in monthly collected editions via iVerse's Comics Plus app. If the print edition is funded, it will be printed by Ape Entertainment.

The publisher describes Template as an action thriller with cyberpunk flair. Centering on a private security organization called Oversight, the story chronicles their attempts to make the perfect android soldier. When the first attempt fails, they speed up plans to try again under the assumption they learned from their mistakes. It is at this point that the main character, Beta, is created. Over the course of the series, her development is followed as she explores her own personality and discovers what she can and can’t do not being in full control of herself.

Occasionally, publisher Quinton Miles will release another form of content by way of "Oversight Dossiers." This short video series provides information such as character bios, mission briefs and other items that compliment the main story found in the comic. These videos will also be included in the trade paperback edition, along with two new dossiers that will be exclusive to the book.

Template is created by Quinton Miles and Andres Quezada , who respectively handle the writing and art duties. Comics veteran Nathan Lumm is the colorist, while Martín Alberto Pérez Carrara (aka MaGnUs) is the letterer.

You can check out the Kickstarter video below.