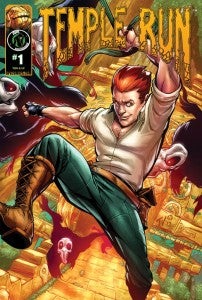 Ape Entertainment, Imangi Studios and Dimension Brand Group announced today that the Temple Run Comic App is now available for iPhone, iPad and iPod touch. The Temple Run Comic App is based on the Temple Run game. The Temple Run Comic App costs $.99, which includes the first issue and, for a limited time, the second issue at no additional cost. In issue #1, Guy Dangerous and a band of adventurers go in search of a lost Incan city and the treasure it holds, and they comes face to face with a mysterious golden idol, which might bring more than they bargained for. In issue #2, Guy Dangerous touches the idol, and they are transported to an ancient temple in a mysterious land, but they're not alone. Guy and his fellow adventurers have to race to escape the deadly traps and hordes of ravenous demon monkeys they encounter at every turn. "We had an exciting opportunity to expand the Temple Run universe with the new comic app, and couldn't wait to share it with our fans," said Keith Shepherd, who co-founded Imangi Studios. "We are looking forward to adding even more depth to the story with Guy Dangerous and his many adventures to come." A full-color comic book series is available in print as well at local comic shops.