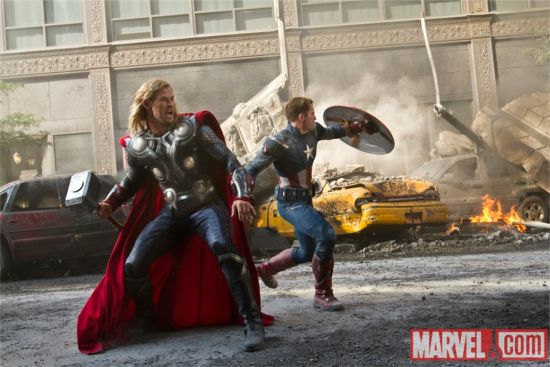 Now, it looks like the executives at Marvel have finally had enough, and they are ready to fire back with a major marketing push for The Avengers. Things kicked off earlier this week with Empire magazine announcing four different covers featuring The Avengers for their March issue. According to Marvel, they will also be releasing more Avengers photo and info real soon.

And then there’s the Super Bowl, just a little over a week away. It’s been previously reported by the LA Times that Walt Disney Pictures (which owns Marvel Studios) bought air time during the Super Bowl. While this shouldn’t be a shocker, The Avengers will likely be one of the movies promoted during the Super Bowl, finally revealing a second official trailer for the highly anticipated movie.

Last year, during the Super Bowl, new spots for both Captain America: The First Avenger and Thor aired. Marvel made the announcement that the spots would be airing in advance of the Super Bowl, so expect an official announcement to come any day now about The Avengers and the Super Bowl. Likely as part of the additional info that Marvel has promised to release real soon.

So what are your thoughts? Can a super push help The Avengers rise above The Dark Knight Rises? Or are The Avengers destined to forever reside in the dark shadow cast by Christopher Nolan's last Batman film?