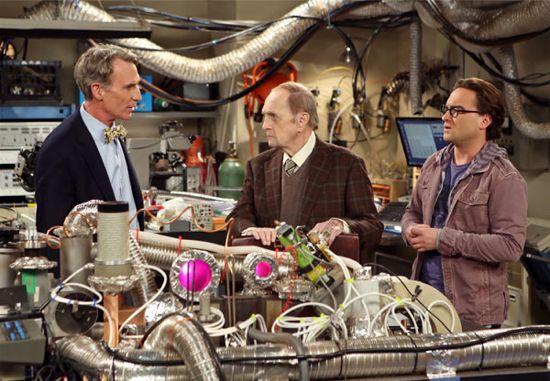 Howard tells Raj that Bernadette’s having a girl’s night on Friday and asks if Raj wants to do something, but it turns out Raj is going to girl’s night to make jewelry. Leonard tells Sheldon that he got an email from Professor Proton asking for help on a paper about nano vacuum tubes. Sheldon is upset that Professor Proton didn’t come to him first.

Sheldon whines to Amy about Professor Proton not coming to him for help, and Amy suggests that maybe Professor Proton finds Sheldon a bit much. Amy starts to suggest that Sheldon can be annoysing, but she stops short of finishing her sentence. Sheldon says he knows she was going to say annoying.

Raj is at girl’s night with Bernadette, Amy, and Penny. They are making necklaces with glue, when Howard shows up and offers to get his soldering gun to help.

Raj is making necklaces with the girls again, when Howard shows up with more tools to help them. Raj seems annoyed that Howard is intruding on girl’s night.

Leonard is working with Professor Proton when Sheldon sends Leonard a picture of himself with Bill Nye the Science Guy. Professor Proton asks Leonard why he puts up with Sheldon, and Leonard says that Sheldon is the smartest guy he knows. He adds that Sheldon might be a little broken but they need each other. Leonard gets a text from Sheldon that Bill Nye ditched him at smoothie place.

Raj brings Howard a lightsaber belt buckle that he made for him. Raj says he has one to, and then suggests that they can have little swordfights whenever they want.

The Big Bang Theory Recap With Spoilers: The Proton Displacement