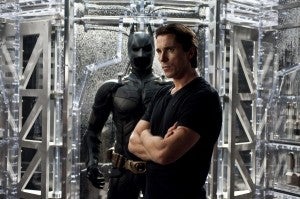 Want to get the full Bat-experience leading up to the midnight release of The Dark Knight Rises on July 20? Well, AMC Theaters--the same folks who screened a six-movie Avengers marathon back in May--have your back, according to Collider.

The website reports that AMC will screen a "Dark Knight Marathon" of all three films, presumably set up the same way the Avengers marathon was with the newest film beginning at 12:01 a.m. and the previous films being timed around it. With a runtime of two hours and 45 minutes, The Dark Knight Rises will still end around 3 a.m., but with about another five and a half hours of Batman Begins and The Dark Knight screening before the film starts.

No word yet on whether the marathon will be available in IMAX; none of director Christopher Nolan's Batman films have been filmed in 3D so far, something that's been a point of contention between the filmmaker and the Warner Bros. studio heads who wanted the option open to inflate the box office (something The Avengers have managed to do pretty well--it's the #2 domestic box office release in history, behind only Avatar, the all-time box office champ.