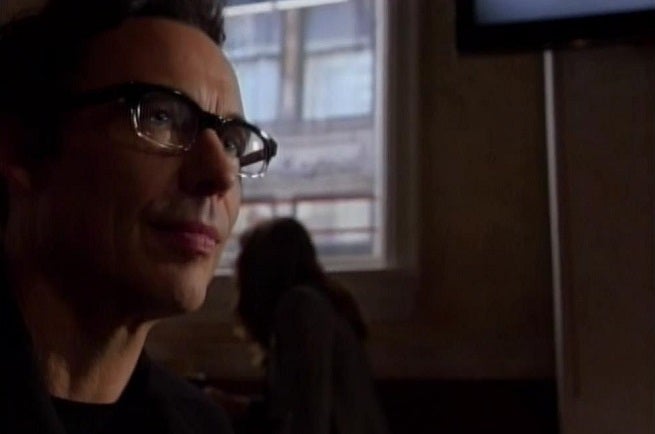 Warning: Spoilers ahead for tonight's episode of The Flash, titled "Out of Time."

Tonight on The Flash, the true identity of the Reverse-Flash was revealed, giving fans an idea of what Tom Cavanagh's "Harrison Wells" is really after.

He's Eobard Thawne, Wells told Cisco Ramon, and he's been stranded in the past for years. He wants to get home, to "my world and my time." In the comics, that time is the 25th Century. He first attempted to do so by killing Barry Allen as a child, but ended up killing Barry's mother instead.

And now that fans know who he is and what his endgame is, Cavanagh and executive producer Andrew Kreisberg joined a group of reporters at a screening yesterday to talk about exactly what that means.

Now we know that Harrison really is Eobard Thawne. What's his connection to Eddie?

Andrew Kreisberg: You can take him at his word that there obviously is a family connection between the two of them. There are some great scenes coming up, between Tom and Rick [Cosnett], that starts to become a storyline. It’s cool stuff. We’re not trying to purposely trick the comic book fans. Being one myself, you can get upset when it’s not quite the way it was in the book.

But the show has to live on its own and it has to be for everybody. It can’t just be an adaptation of comic books that people have already read and know so well. Obviously, we’ve thought of this, from the very beginning, and it’s been leading up to this.

Will we be conflicted about how we feel about Dr. Wells?

Tom Cavanagh: He’s just a guy trying to get home. I think you can all appreciate that, emotionally. There are many ways to play a guy that is, from the starting point, already that rich and already has this many layers.

The starting point has always been Eobard Thawne, and then Harrison Wells is layered upon it. What’s good about it is that it’s not exactly duplicitous. There’s an element of that, but he doesn’t lie. He doesn’t lie to them. He almost never lies. He’s telling the truth. He’s furthering his agenda, but he’s also furthering Barry’s agenda, and those two agendas are simpatico. As he’s working with them, he is appreciative.

All that stuff that you see is not a mustache-twirling, villainous starting point. It’s actually genuine. We’re trying to accomplish something, and for the first season, we’re accomplishing it together.

As we see in this episode, that makes it a little more heartbreaking when the next phase of the plan starts to happen. I think that’s just good writing. If he was just a dick the whole time, when he kills Cisco, you’d just hate him. But now that we’ve established that they are a group and a team, to watch that fracture, I find it all the more compelling.

Kreisberg: We always talk about, if one of us was suddenly thrown back many centuries into the past and it took you 15 years to get home, you wouldn’t be sitting there by yourself. You’d meet people and you’d make friends. Even if, intellectually, we’re understanding that these people are long dead, or that every one of them could die and your home is still where it is, no man is an island.

Eobard Thawne, himself, is not an evil man. He has a reason for doing what he’s doing, and he has an agenda. He thinks of himself as the hero. And bad people can love other people. Bad people are capable of love. Bad people are capable of incredible amounts of kindness and generosity. This is the truth. There’s nothing he said in that scene to Cisco that isn’t the truth. He’s sorry he found out. He’s sorry it has to happen. But, it does have to happen.

There’s a scene in Episode 16, which mirrors that scene and really speaks to that.

What is Eobard Thawne’s quest now? Will he give up his quest to kill Barry Allen, if it means getting back home to his time?

Kreisberg: He wants to get home. He wanted to kill Barry, and he thought it was going to be a neat and easy thing. Instead, he’s found himself trapped here, for the last 15 years, and all he wants to do is get back.

Imagine if one of us was transported back into the past, with no antibiotics, no Internet and no indoor plumbing. These are the kinds of thoughts that he has. Every day in this time is an assault on him. He’s in the wheelchair, but he really is trapped. Getting back is his priority, and if he can kill Barry in the process, it’s two for two.

So what do you think ComicBook.com readers? Are you excited to se more of the Reverse Flash? Let us know below!

The Flash: Tom Cavanagh and Andrew Kreisberg On The Reverse-Flash's Big Reveal