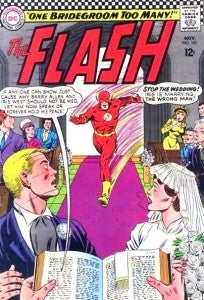 Superman isn't the only superhero finding himself suddenly single in the new DC Comics Universe. The Flash will also be a bachelor. Just like with Clark Kent and Lois Lane's marriage, the marriage between Barry Allen and Iris West never happened. Also, just like with Clark Kent and Lois Lane, Barry Allen isn't even dating Iris West. Instead, Barry Allen is dating his longtime co-worker Patty Spivot. However, there are hints that this relationship might not be lasting for long. Iris West is still a member of the supporting cast. In the new Flash series, Iris West will be a blogger on the Central City Citizen's website. She will apparently be hitting up Barry Allen for anonymous crime-story tips. On The Source, DC Comics editor Brian Cunningham says this new change could give fans "the opportunity to see why Barry and Iris fell in love in the first place. Or maybe not!" What are your thoughts on DC Comics war on marriage? While being single could make the story possibilities for The Flash more interesting, the dissolution of The Flash's marriage is in many ways a bigger move than what happened with Superman. Clark Kent and Lois Lane had only been married in the comic books for fifteen years, but Barry Allen and Iris West had been together for forty-five years. To many fans, undoing Superman's marriage actually restored childhood memories of when Clark Kent was single, but The Flash has always been married to all except the oldest of current day comic book readers.

The Flash's Marriage Erased In The New DC Comics Universe