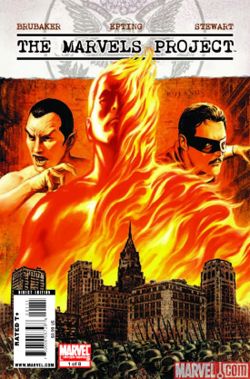 The Marvels Project is one of the most hyped books to come out of Marvel Comics this year. Did the first issue, which hit comic book shops this week, live up the hype? Yes, this is one comic that all comic book fans should pick up. If you haven't read The Marvels Project #1 yet, then be warned that the following review does contain some spoilers. The Marvels Project #1 is written by Ed Brubaker with art by Steve Epting. The mini-series, which will run for eight issues, tells the story of some of Marvel's earliest heroes. As far as the artwork, Steve Epting perfectly captures the look of the time period. On the second page, Epting delivers in the second panel an image of various Marvel characters that would make an excellent poster. Dave Stewart also does a great job as colorist for Epting's art, bringing out a classic look. As far as the writing, the first issue sets things up nicely. An elderly, dying Matt Hawk is recounting various stories to Dr. Thomas Holloway. Of course, Matt Hawk is the Two-Gun Kid, and Dr. Thomas Holloway is The Angel. Even with this great start, the best thing is that the rest of the comic is even better. One of the most haunting scenes involves German ships dropping depth charges into the Sargasso Sea in order to fish for Atlanteans. Of course, this fishing doesn't sit well with Prince Namor, who shows up to enact his vengeance. Another nice touch is how the Human Torch is unveiled as part of a plan to provoke a reaction from the Germans. The combination of these larger than life characters emerging at a time when the world is on the brink of war makes for a very compelling storyline. This is definitely one comic book that leaves me hungry for the next issue. I would even go as far as to say that it looks to be shaping up as the best written series published by Marvel Comics all year.