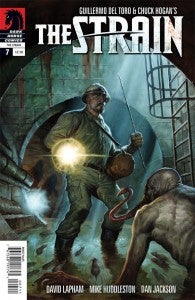 "He Is Here," announces a teaser trailer that debuted last night during the midseason finale of AMC's The Walking Dead. Since nobody really says much, you could be forgiven for having no idea what this was for, but now that it's been posted on YouTube it appears as though the ad is for The Strain, the new FX series from former Lost showrunner Carlton Cuse and creator Guillermo del Toro, who brings the property to the small screen after years handling it as novels and comic books. The Strain, a 2009 vampire horror novel by del Toro and Chuck Hogan, was originally imagined as a TV series and only went to the printed page when del Toro couldn't find a buyer for the work. With three bestsellers under his belt, del Toro was able to sell to FX earlier this year and the project is currently in development.