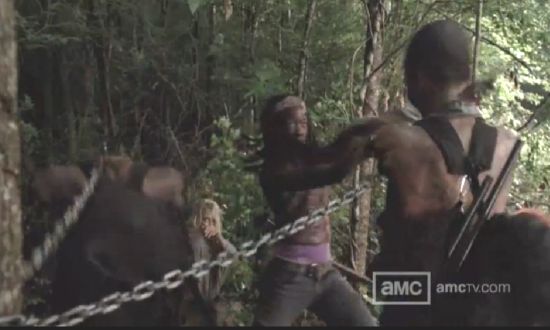 AMC has released both a look inside video and a behind the scenes video about the recent “Walk With Me” episode of The Walking Dead. In the look inside video, executive producer Gale Anne Hurd explains the meaning of the title of the episode. Hurd said, “Walk With Me really has a couple of meanings. One is Andrea is now walking on this journey with Michonne. They bonded over the months that they spent surviving on their own. And it’s also walk with me into a new community..walk with me into The Governor’s world of Woodbury.”

One of the most shocking scenes of the “Walk With Me” episode was when Michonne used her katana to chop the heads off both her pets. While there has been much speculation over why Michonne did this, Danai Gurira, who plays Michonne, explained the decision. Gurira said, “Michonne is hyper-vigilant, hyper-aware. So the idea of her pets starting to actually draw attention to them. They have to go. It’s just a pragmatic choice. It’s about what do I need to do in this moment to make sure we proceed in the way that I want us to proceed to the next moment.”

Another shocking scene in the episode was when Merle appeared behind Andrea and Michonne. Laurie Holden who plays Andrea, said, “When Andrea sees Merle it’s like seeing a ghost from the past. There’s some pretty bad history there. Nothing good can come out of this. It’s just pure shock and terror. Kind of scares the hell out of me. I don’t have a gun on me anymore, and he’s got this stump. And he doesn’t know that we went back for him, and I don’t know if he’s looking for blood or vengeance. It’s a very dangerous dance.”

In another moment from the look inside video, David Morrissey, who plays The Governor, explained his character. Morrissey said, “What we see in the comic novel is a man whose character is fully formed. We don’t see that here yet. The character that you love emerges. He doesn’t come at you full-formed. But he’s created a security for people in a very insecure world and that’s no mean feat. So he’s quite a tough character.”

In the behind the scenes video, Michael Rooker talks about the return of his character Merle. Rooker said, “Merle has leaned down a little bit. I’ve lost about 28 pounds, which really worked well for Merle’s return. The craftspeople fashioned a prosthetic for Merle, and it’s quite comfortable once you get it on. That’s the real one. We have a rubberized one that I will be running around with mostly, in case I trip, you know.”

The Walking Dead Behind The Scenes: Michonne Killing Her Pets Was A Pragmatic Choice