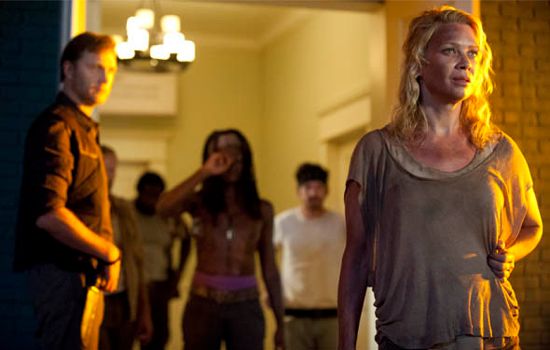 Last week, Hershel became the first member of Rick’s group to survive a zombie bite in the “Sick” episode of The Walking Dead. The second episode was also a huge ratings success, pulling in 9.5 million viewers.

This week’s episode of The Walking Dead is entitled “Walk With Me.” According to the AMC description, “After witnessing an accident, Andrea and Michonne are introduced to a new community of survivors. As conflicts arise with their new acquaintances, a decision must be made.”

While the first two episodes of The Walking Dead have focused mainly on Rick and his group taking control of the prison, the previews of the third episode indicate that viewers will finally get to see what has become of Andrea. At the end of season two, Andrea was rescued from zombies by Michonne.

In the official sneak preview for “Walk With Me,” Andrea and Michonne spot some smoke rising in the distance and go to investigate. A sneak preview at the end of last week’s episode also revealed that viewers can look forward to meeting the Governor and the return of Merle in this week’s episode.

The “Walk With Me” episode of The Walking Dead airs on AMC on Sunday, October 28 starting at 9:00 PM ET. Check out a forty-one second sneak preview of the episode below.

The Walking Dead Sneak Preview: Walk With Me