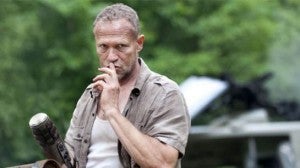 A trio of new teaser ads for the upcoming third season of AMC's The Walking Dead focus on some of the show's most iconic images while managing to onliy really touch on one plot point from early in the season (and all manage to get in that "not available on DISH" dig that AMC is so fond of these days, too).

In the first, titled "Darkness," the survivors appear to be scouting the prison, wandering through the darkness until they come upon a group of walkers.

In the second, called "Resurrection," we get another look at Herschel's faith, and the way it interacts with and is interfered with by the walkers. It' s a fairly static image of a walker behind a fence with narration from last season over it. It's likely, given the lack of a DISH Network attack in the tag, that this one is actually from season two, but Zap2It, who linked these teasers for us, included it with the others.

So, too, does the third teaser, "Shivers," feature old footage and no attack on DISH. This one's a huge spoiler if you haven't finished season two yet, though, so I believe it's probably a new one. Hard to imagine AMC having aired this any time last season!

The Walking Dead, based on the best-selling series of comics, graphic novels and novels by Robert Kirkman with artist Charlie Adlard, premieres on October 14 on AMC. Series regulars Andrew Lincoln, Sarah Wayne Callies, Laurie Holden and Steven Yeun return, along with newcomers David Morrissey, who plays series villain The Governor, and Danai Gurira, who will bring the fan-favorite Michonne to life.