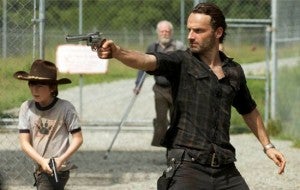 If last week's episode of AMC's The Walking Dead was all setup, this week's "When the Dead Come Knocking" promised to give at least a bit of payoff, with teaser trailers and TV spots promising torture, sexual abuse and possible murder or dismemberment.

All in all, a pretty standard week on The Walking Dead.

We also get the first meeting between Michonne and the other survivors, which promises some long-term plot ramifications. And after this episode airs there's a seven-day countdown to the introduction of fan-favorite character Tyreese.

Things are moving along. So let's do the same...

The episode opens with Glenn duct-taped to a chair; Merle tells him that all is not forgiven for being left behind in Atlanta, and that he hopes T-Dog died slowly for not being fast enough with the key (he did, of course, but that's beside the point). He demands to know where Daryl is, and starts beating on Glenn when Glenn won't tell him. Maggie can hear everything, and is petrified. Glenn tries to fight back, but has no luck.

As we saw in an earlier preview, the prison's story begins with the smell of dead walker starting to wear off of Michonne, leaving her on the other side of the fences against a group of them. Rick helps her in, noting that she's got a gunshot wound and not a bite, and Daryl joins him, bringing him to see Carol while Michonne recuperates in a cell.

Back in Woodbury, the Governor's dalliance with Andrea is interrupted when he's brought a message that "Mr. Coleman is ready."

They ask Michonne how she found them and why she was carrying formula; she tells them that she picked it up after being dropped by Glenn and Maggie, and that they were taken by the same person who shot her. Things look promising for a moment until Rick reaches out to touch her and she grabs him. Daryl threatens her, and she tells them to find their friends by herself.

Michonne tells them about Woodbury and the Governor, and when she gives them a satisfactory answer as to how she found the prison, Rick offers Hershel to help her with her injuries.

Back in Woodbury, Merle is impressed by Glenn's ability to withstand the torture, and asks again where they're at. Glenn says it's only a matter of time before Rick and the others come for him.

At the prison, Hershel is treating Michonne's wounds, and after a long silence from both of them, she thanks him.

After a discussion, Daryl, Oscar and Rick decide to set out to look for Glenn and Maggie, bringing flash-bangs, grenades and other things from the armory. Michonne asks how so few of them cleared the prison, and she's told there were others. Rick, before leaving, tells Carl that he shouldn't have had to go through what he did with Lori, and that if anything happens while they're gone, he has to keep people safe in the cells until Rick returns. Before he leaves, Carl asks Rick if Judith is a good name for his sister, and Rick agrees. He and the others leave in a car.

The Governor brings Andrea to the dying Mr. Coleman, where she'll be assisting Milton in his walker research. He doesn't tell her anything though, just barks orders at her. He puts Coleman through a series of memory tests while Andrea plays a record, at the end of which the man asks Milton to keep the record playing "while they wait."

In the interrogation room with Glenn, Merle brings a walker in and uses him as an interrogation tool. Despite being duct-taped to the chair, Glenn manages to use the furniture in the room in self-defense for long enough to break his chair and use a piece of it to kill the walker--only moments after the walker tries and fails to bite him because of Glenn's use of the duct tape as body armor. He screams, long and loud. 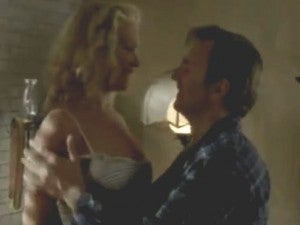 After Mr. Coleman passes away, Milton explains, he'll ask the questions again and then Andrea will kill the zombie. They're trying to decide whether any memory of their life exists after the walker. The man is dying of prostate cancer, but as Woodbury has no means to cure him, he volunteered for it.

Andrea tells him that there is no conscious mind--that she believes they're just monsters when they reanimate. She asks if Milton has seen it before and he says no.

Coleman stops breathing, and the pair restrain him.

Outside the interrogation area, the Governor expresses concern about Rick's group coming to save their friends, and says he'll handle Andrea's interrogation.

Inside the dark room, the Governor cuts her bonds and goes straight to his innocent act, asking if he may sit across from her. He offers to take her back home; "Tell us where they are and we'll drive you there." When Maggie says she wants to talk to Glenn, he says he can't allow that. He offers to bring the group to Woodbury instead. She continues to refuse, and he tells her to stand up. All of his niceties fade away and he demands it, so she complies. 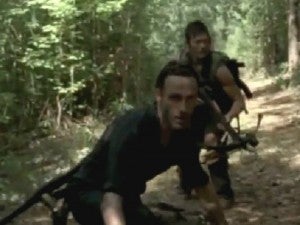 As we've seen in the previews, the Governor tells her to take off her shirt or he'll bring Glenn's hand in the room. She removes her shirt petulantly, and he urges her on, so she removes her bra. He removes his belt and moves around the table toward her, pulling away her chair and touching her hair while she looks away. He slams her face down on the table, and she tells him to do whatever he's going to do, and to go to hell. His hand lingers on her backside and then he walks away.

The survivors' car pulls over and Michonne tells the men that there are patrols from Woodbury, so they're better off on foot--that it's a mile or two away. They're being pursued by walkers but not quickly and don't stop to kill any.

In the woods, Rick thanks Daryl for helping with Judith while he was gone. A walker hears them and a small group of them starts toward the group of survivors. They take out a handful of walkers with their close-combat weapons to avoid gunfire but then decide there are too many of them and run for cover in an old house as they're being pursued by a herd of walkers. Inside the house, they find a terrible smell -- the family dog is dead in there. With walkers outside, Rick reaches onto the bed and pulls back the covers. A man with a gun pops out of the bed and tells them to get out of his house. He threatens to call the cops, and Rick says that he is a cop. They're trying to calm the man down and he cocks his gun. WHen the man demands to see his badge, Rick cold-cocks him and the man shoots through the door and tries to run for "help." Michonne staps him and kills him before he can get outside, then they throw his body out to the walkers and escape around the back of the building while he's being swarmed.

Back in the Coleman room, he's starting to reanimate. They turn on the record and Milton starts the memory drill. After a few questions, he believes that Coleman may have tried to respond and demands they release the restraints to try a second time. When he does so, Coleman lunges at him and Andrea stabs the zombie throught he brain.

The Governor brings topless Maggie into Glenn's room, and says that they're through with games, and that one of them will surrender the camp. When the Governor points the gun at Glenn, Maggie immediately gives up the prison. He doesn't believe that only ten people could have cleared the prison, but becomes convinced by their reactions. Before he leaves the room he cuddles Maggie to him while she struggles and Glenn struggles not to go after him, then he throws her at him.

The Governor, with Milton and Merle, is discussing the situation, saying that the group has done something at the prison that Woodbury didn't think could be done. He questions Merle's loyalty if Daryl comes looking for Maggie and Glenn. Just as Rick and his group prepare to storm the fences, Merle assures him that his loyalty lies with Woodbury. The Governor assigns a nameless Woodbury survivor to take a small group to scout the prison to be sure they're not being lied to.

Andrea walks past the wall where Rick and his group are about to attack and comes to the Governor's place, where he asks her about Milton and she pours herself a drink, saying simply that Mr. Coleman died, and that Milton didn't find what he was looking for. This shakes both of them a bit, although the Governor is better at hiding it as Andrea curls into him.