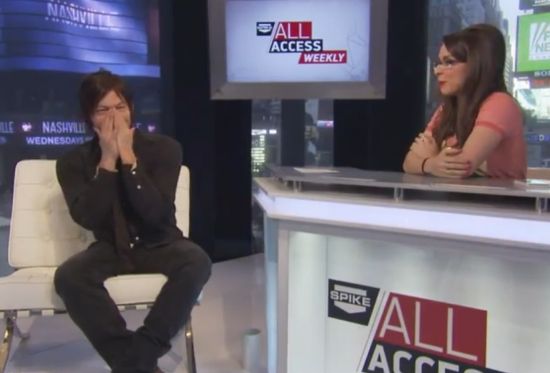 As fans gear up for the return of The Walking Dead on Sunday night, the cast has been making the rounds to promote the show. Especially Norman Reedus who has recently been traveling the world to promote The Walking Dead, and even popped up in a commercial during the Super Bowl.

In addition to appearing on a Larry King Now episode that will air on Thursday, Norman Reedus, who plays Daryl Dixon on The Walking Dead, also taped a segment for Spike’s All Access Weekly. While the episode has not yet aired, Spike has released quite a hilarious blooper from the interview.

In the video, Spike All Access Weekly host Katie Linendoll makes a very unusual choice of words when she asks Norman Reedus about the possibility of his character getting killed of. Hint: killed is not the word that she uses.

The entire episodes of Spike’s All Access Weekly that features the interview with Norman Reedus will air on Spike TV at 12AM/Midnight on Wednesday, February 6, 2013.