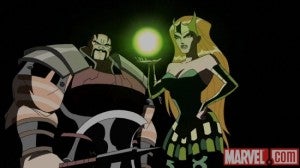 Marvel Studios' Kevin Feige, in a new interview with Collider, revealed that Thor would face down "a major, major new antagonist" in Thor 2, which is expected to begin filming this summer, but that it wouldn't be Thanos, and that the seeds sown at the end of The Avengers will be reaped at a later date.

Star Tom Hiddleston, who plays Loki in the Marvel films, has recently been mentioning during media appearances that he expects Thor 2 to shoot this summer in London. Loki appears in the film, but is not the main villain, according to multiple reports. Rumor has it that The Enchantress will be in the film, though that role is neither confirmed nor cast, and that Mads Mikkelsen, whose casting has been confirmed, may appear as the Executioner.