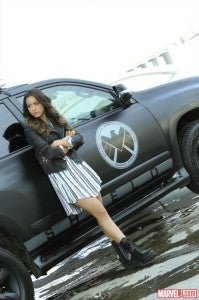 Marvel have just released an episode description for Agents of S.H.I.E.L.D.'s November 19 episode, "The Well," which will deal with fallout from the events of Thor: The Dark World.

In the aftermath of the events chronicled in the feature film Marvel's "Thor: The Dark World," Coulson and the Agents of S.H.I.E.L.D. pick up the pieces--one of which threatens to destroy a member of the team, on Tuesday, November 19 (8:00-9:01 p.m., ET) on the ABC Television Network.

"The Well" was written by Monica Owusu-Breen and directed by Jonathan Frakes.

Given the nature of the series so far, the "picking up the pieces" that the team is doing seems likely to be literal; perhaps a piece of Asgardian technology? In any event, the episode hits in just over two weeks.

Thor: The Dark World, Agents of S.H.I.E.L.D. To Cross Over a Bit