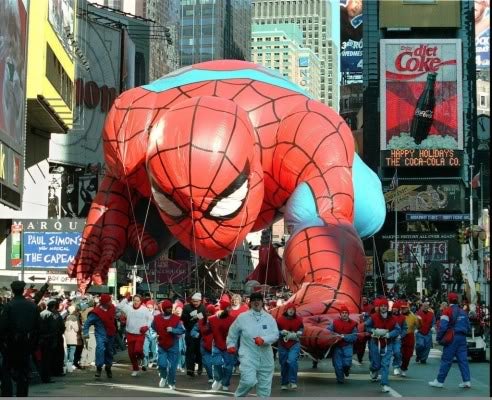 Welcome back to another installment of Throwback Thursdays, where we take you through the annals of comic book history for an entertaining look at how things were done in the good old days.

In honor of Turkey Day, this week's adventure in nostalgia is fueled by the Macy's Thanksgiving Day Parade. Of course, any comic book fan worth his or her salt knows that Spider-Man is one of the most iconic parade balloons to float through the streets of New York. Though most are likely to talk about the partially-deflated Spider-Man that limped through last year's parade, it's the Spider-Man balloon of 1987 that likely bruised the most egos.

The story comes from Jim Shooter, former Marvel Editor-In-Chief from 1978 to 1987. As Mr. Shooter reminisced on his blog a few years back, he played a key role in creating the first Spider-Man balloon for the Macy's Thanksgiving Day Parade. Shooter became involved when Marvel's VP of Business Affairs Joe Calamari called him, ironically enough, just a month after he was fired from Marvel. Calmamari told Shooter that Macy's was set to debut a Spider-Man balloon for that year's Thanksgiving Day Parade, but production kept stalling in the designing stages. Knowing that Shooter understood "3-D things, toys and such," Calamari asked the former Chief if he would consult on balloon's production.

"Marvel had provided reference to the Macy's balloonatics, but Joe didn't like what they'd come up with. He'd brought John Romita, Sr. in to advise them, but, he said that hadn't helped. His assessment was that John (and comic book artists in general) were okay when it came to two-dimensional drawings, but just couldn't deal with 3-D things, like balloons."

Calamari and Shooter drove out to Macy's balloon studio. When they arrived, Calamari warned Shooter that the Spider-Man balloon sculptor carried a massive ego, and was difficult to work with. After seeing the Spider-Man balloon, which had the proportions of a chubby baby, according to Shooter, Shooter told the sculptor that he needed to reconfigure the entire balloon. When the sculptor wouldn't budge, Shooter realized why he had been brought in even after John Romita Sr., celebrated Spider-Man illustrator, had consulted on the project (see the the resemblance?): Calamari wanted him to play bad cop with the sculptor. 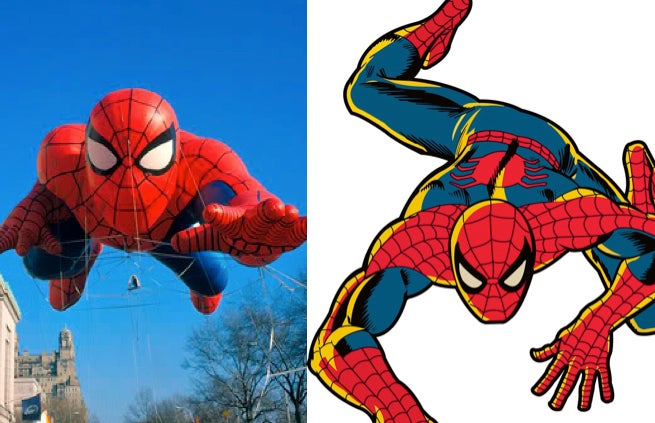 Before we move on, we should probably rewind to Shooter's tenure—and reputation—as Marvel's Editor-in-Chief. While it's a lot of "he-said-she-said" at this point, the general consensus is that Shooter didn't get along with a majority of Marvel's creative talent. As many creators have noted, Shooter held zero-tolerance policies with deadlines, enforced a strong editorial edict, and was not one to negotiate. Many Marvel stalwarts like Steve Gerber, Marv Wolfman, Gene Colan, and John Bryne fled Marvel during Shooter's tenure after years butting heads. You can read further into that here or in Sean Howe's excellent Marvel biography Marvel Comics: The Untold Story. Either way, Shooter didn't play ball with creators, and people knew it.

Now that that's established, take it away, Jim:

I told the guy firmly that the figure had to have adult proportions. Wider shoulders. Narrower waist and hips. Muscular, but not over-built. I showed him reference (which he already had been given). I demonstrated proper hand position. Foot position.

Throughout this, the sculptor was fuming. I pressed on.

"This arm forward, this leg back. He has to look like he's crawling!"

"WHAT?!" he yelped. "Absolutely not! I'd have to cut the steel framework!"

"Well, then," I said, "you'll have to cut the framework," while thinking, "There's a steel framework?"

He stridently insisted that what I was describing could not be done. Impossible! It won't fly!

The squabbling continued until Shooter, as he puts it, "won."

But even then, the sculptor has failed to include the webs on The Spider-Man. Deciding to pick his battles, Shooter told the sculptor to "not even bother." But the webs eventually made it onto the costume, Shooter suspected, through John Romita Sr. How was Shooter so sure? "Because they ended up looking right," he wrote.

"Someone suggested doing a New York City scene with Marvel Super Heroes. I offered a sketch of the float as a cross-section of the city, showing the sewers and lower levels, Doom's Lab, the street level, Doctor Strange's house and skyscrapers, with heroes and villains each in their proper milieu. I proposed the building that tipped when the Hulk pushed it over. They used my design, and had "extra" characters walking alongside the float."

It's worth noting that for all of the flack that Shooter received for being bullish and uncompromising, he received equal praise for getting things done. During his nine years at Marvel, Shooter ended the plague of delayed books, developed the growth of the direct Market, and evolved Marvel from a comic book publisher to a popular culture brand with licenses and cross-media promotions. People may not have agreed with Shooter's managerial style, but few could argue that it delivered results. If Shooter hadn't brought that hard-nosed approach to creating the Spider-Man balloon, who knows what the world may have gotten. And for that, we remain ever-thankful to the editor.