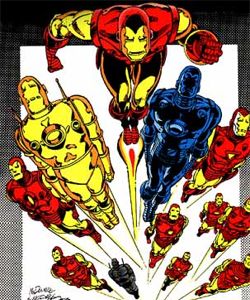 For most villains and heroes, the costume is the final, outward piece of their mission and who they are as that alter ego. It sends a message. For characters like Batman, it's a symbol of the fear they hope to spread. Superman's cape and colors add a layer of anonymity in his mission for justice. Others, though, are not so fortunate when it comes to otherworldly gifts or perfectly trained bodies. Here then are those 10 comic book characters who probably wouldn't make it without the gear and getup.

1. Tony Stark (Iron Man) - Billionaire he may be, Tony Stark is no sleek detective, telekinetic or shape-shifter. Charming and intelligent are certainly two of his strengths, but Iron Man's armor will always be what allows him to fly, fire repulsor beams and shoot down deadly warheads from various points. Marvel has done an effective job in establishing Tony Stark as a vital and powerful character outside of his super-powered counterpart, but the Iron Man suit will be what makes him the next level of superhero.

- Until this recent batch of young heroes, The New Warriors were usually made up of mutants, Atlanteans, aliens and other powered beings. The most recent incarnation is comprised mostly of de-powered X-Men. With their suits and talents coming from sources such as Stark, the Wizard, Machinesmith and others, it's no wonder that it is so important that all of their equipment and devices work properly when in the field. While members like Jubilee, Chamber and Wind Dancer were all naturally powerful as former mutants, their transition to being so dependent on their new identities and technologies was interesting. Too bad the series has been cancelled!

- In his immediate defense, I will say that a good portion of the reason that he is so dependent on his costume is because, well, he could DIE if he's not in it! Despite that however, he does benefit from being super-strong while in the suit, and his freeze gun allows him to continue to wage battle against Batman, Robin and the rest of Gotham's do-gooders. Before his transformation, Victor Fries was a brilliant scientist, set on curing his wife's then incurable condition. Due to an accident, he is now trapped in that suit. Rest assured that the suit has not only preserved his intellect, but it's helped to chill a good portion of his empathy for others.

- Are the men in this group, usually comprised of Captain Cold, Heat Wave, and Weather Wizard with others now and then, truly terrible people with a love of crime? Yes. Would they be nearly as effective without their guns, special suits and wands? Doubtful. Having tormented and locked horns with almost every man to call himself The Flash, The Rogues have also had battles between their classic versions, such as the ones described here, and their modern versions. What makes The Rogues an interesting group is their code of honor amongst themselves. Their diverse costumes and gadgets, while unique and deadly, are also a dependency they share.

- Quentin Beck may have been a wonderful special effects and stunt man, used to working behind the scenes, but his alter ego Mysterio loved the limelight. As Mysterio, Beck tangled with Spider-Man for years. Using an array of holograms, smoke pellets and a host of other contraptions and tricks, the battles spanned decades. Beck kept himself disguised by a giant glass dome over this head, adding, perhaps in his rationale, to his name. The costume served to add presence and an air of seriousness to Mysterio and his exploits, without it, Beck could never have pulled off half of the tricks he did. There have been other men under the dome since, but the persona is still the same.

- Born with the mutant ability to manipulate fire and flames, Pyro used his amazing powers to wreak havoc and mayhem on humans and the X-Men for years, mostly as a member of the Brotherhood of Evil Mutants. Despite this awesome power and mastery over fire, Pyro, alas, could not generate flames himself. He had to wear a special suit, equipped with a flame-throwing mechanism that allowed him to project the fire that he then controlled. Even in film and TV versions, Pyro is seen with either a lighter or a flame-thrower. Are you really considered frightful and terrifying if you need a welding kit to even perform?

Booster Gold could be considered by many to be the hand-me-down king of the DC Universe. Born with no super-powers, although an athletic man, Michel Carter acquired a Legion flight ring, some equipment from LexCorp and other materials from Brainiac 5 in order to construct a suit. Considered mainly a showboater in his early years, Booster actually has taken on a more serious role in comics over the past couple of years, thanks again to assistance from Skeets, his super-robot, and Rip Hunter. His dependence on technology harkens a likeness to Tony Stark, but Stark gets taken a lot more seriously.

- No matter who wears this creature, this costume is in and of itself one of the most powerful forces in the Marvel universe. A symbiote from outer space, this costume grants the wearer extraordinary powers and strength, usually coupled with a hatred for Spider-Man, a trait shared by its original wearer Eddie Brock. Brock was a man full of hatred, but without the Venom costume, he was simply a hothead. Even now, the wearer of the costume, Mac Gargan, is a man of power and rage. He too, ironically enough, was dependent upon a costume when he was known as The Scorpion. No matter who wears this costume, the real power rests in the alien.

- No matter what form or identity he takes, Dr. Henry Pym has a costume to match. Even though his discovery of and use of Pym Particles makes his shrinking and increasing size possible, it's the costumes and accompanying materials that make him superheroic. This is especially true since his costume stretches to fit his shifting size! Whether he's wearing a special helmet for 'ant talk' as Ant-Man or special cuffs as Yellowjacket that allow him to fire energy blasts, Hank's costumes provide the extra something special that take him from scientific genius to heroic member of the Avengers.

- In the same line of thought as Venom, a mysterious object helps supply the power to this line of heroes from the DC universe. Ted Kord and Jaime Reyes are probably the two most well-known men to have the mystical scarab that grants them their powers, and each needed the scarab to perform most of their acts of derring-do. The trick with the scarab was that it seems, especially in Jaime's case, to be activated based on emotions and danger. A costume, while powerful, that depends on you almost losing your cool before it works could produce some interesting moments if you're banking on stopping a robbery!