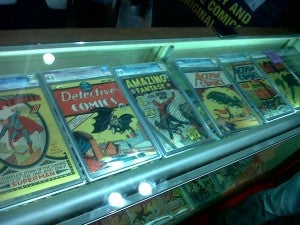 Less than two days remain in the auction of Nicolas Cage's highly graded Action Comics #1.  Depending on if there is a flurry of bidding at the end, Cage's book may or may not set the record for most valuable comic book of all time. So what is the most valuable comic book?  We sat down with some collectors, conducted some research and came up with the following list.  All titles are based on a CGC 9.0.  Note: Auctions are fickle things.  The right buyer might bring a much higher price than anticipated, whereas market forces could also cause a title to sell for less.  In other words, these are our best estimates. 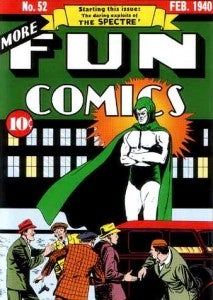 Highest Previous Sale: $207,000 Current Auction Estimate: $250,000 Why It's Valuable:  Debut of The Spectre in February 1940. The character, co-created (or, depending on whose version you believe, solely created) by Superman co-creator Jerry Siegel, is the longest-lived of any of Siegel and Joe Shuster's creations, Superman himself notwithstanding. A fan favorite character who has headlined his own title time after time, and been written and drawn by some of the top talent in the history (Jim Aparo, J.M. DeMatteis, Tom Mandrake and John Ostrander, just to name a few of the more recent ones) of the American comics industry, there's something really enduring about The Spectre that transcends other characters of the Golden Age, many of whom haven't been seen since the Comics Code Crunch of the '50s. 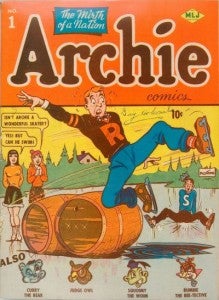 #9: Archie Comics #1 Highest Previous Sale: $167,300 Current Auction Estimate: $260,000 Why It's Valuable: Archie Comics, the company, remains a force to be reckoned with even in a marketplace that values shock, sex, violence, reality and superheroes--none of which the publisher, particularly, has in its books. Archie, the character, is an icon unto himself, with the kind of mainstream success that "bigger" publishers covet. Archie's digest volumes continued to appear in grocery store checkout lines for years after spinner racks (and therefore, most comics) were removed from the stores in question. He has been featured in radio shows, syndicated comics strips (something that few characters who originated in comic books can boast--notably Superman and Spider-Man), and feature-length films as well as being a cultural touchstone for films like Chasing Amy and spawning a small army of imitators and spinoffs. Some of the spinoffs have even taken on a mainstream life of their own, with Josie & the Pussycats, for example, getting a TV series in the '70s and then a feature-film starring hot young actresses in the '90s. Oddly enough, this comic is NOT the first appearance of titular protagonist Archie Andrews (that being Pep Comics #22), making it one of the only comics on this list not to include the debut of any of its long-lasting characters. 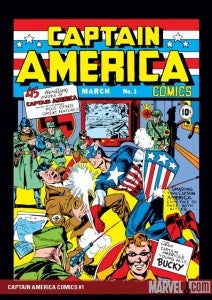 #8: Captain America Comics #1 Highest Previous Sale: $343,057 Current Auction Estimate: $350,000 Why It's Valuable: The debut of Captain America occurred in March 1941. It's quite possible that the rise of The Avengers at the box office (and a solo flick for Cap himself) might help this book to continue to fetch a nice price. The character has been one of the most iconic in the history of American comic books, and even when superheroes fell out of favor, it was hard to take a poke at a character who was--literally!--draped in the flag. He's also one of the first Timely/Marvel characters co-created by the legendary Jack Kirby, who years later would go on to develop dozens of characters for Marvel and dozens more for DC, many of whom are still widely used today. 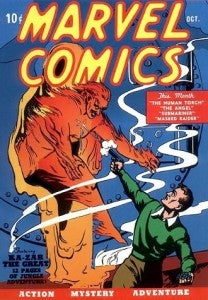 #7: Marvel Comics #1 Highest Previous Sale: $367,000 Current Auction Estimate: $375,000 Why It's Valuable: Published in 1939, this issue featured the debut of The Human Torch.  It also launched a heck of a franchise. When this comic was published in 1939, the company was called Timely. It went through a number of name changes and format tweaks over the years, until Stan Lee grabbed the name of this book and settled on it as the name for the reinvented company around the same time as Fantastic Four #1 was published and the company became a true comics juggernaut. The Human Torch, dramatically different, was the only character from this book to make the jump to the Fantastic Four, although it also introduced characters with familiar names like The Angel and Sub-Mariner. 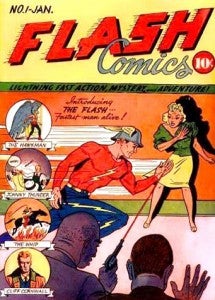 #6: Flash Comics #1 Highest Previous Sale: $450,000 Current Auction Estimate: $385,000 Why It's Valuable: Featured the debuts of Flash and Hawkman. While Superman and Batman clearly touched off the superhero revolution in American comics, The Flash is arguably the clearest early example of American comics lifting from Greek and Roman mythology--something that later became so common many scholars, critics and comics professionals will still refer to comics as modern American mythology. It's also worth noting that Jay Garrick, the Flash of the Golden Age, was the first character to disappear from the public consciousness, and then reappear within the pages of his successor's popular Silver Age comics. This opened the gate to DC Comics' multiverse, a story tool that became so popular it will appear again, even in the context of the New 52 relaunch, when Garrick and his Justice Society cohorts reappear in 2012. 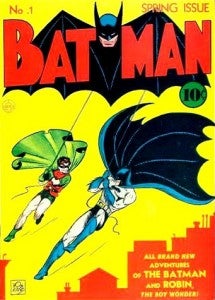 #5: Batman #1 Highest Previous Sale: $315,000 Current Auction Estimate: $400,000 Why It's Valuable: Even though Batman was featured in Detective Comics, this 1940 issue was his first on his own.  Since the Superman and Batman titles have historically been immune to renumberings and reboots, the series was one of the longest-running ongoing monthly titles in American comics, running from this 1940 issue until it was wrapped up in August of 2011 to make way for the New 52. It also featured one of the earliest appearances of Robin, who not only has become an inseparable part of the Batman mythology in his own rite but also kicked off the "kid sidekick" trend that would give birth to characters like Sandy, Bucky, Speedy and more. The cover is one of the most enduring images in Batman's publishing history and, to people outside of comics, both the title and the image are probably more recognizable than Batman's true first appearance. 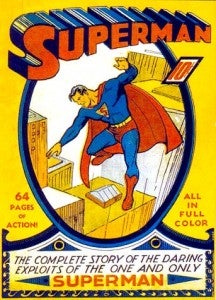 #4: Superman #1 Highest Previous Sale: $250,000 Current Auction Estimate: $600,000 Why It's Valuable: Published in 1939, this is the first issue where Superman had his own title.  It was a reprint of Action Comics #1. High grade issues of Superman #1 simply don't exist—or they don't make it to auction.  The $250k price tag listed above?  It was a CGC 7.5 from 2006.  You don't think some folks are chomping at the bit for a high quality Superman #1 to hit the market? (1939) As you can see from the image at top, CGC brought two copies of Superman #1 to the New York Comic Con this year to display with other highly-graded, valuable comics--but the photograph doesn't capture what grade the issue on the top shelf received and the lower comics are barely visible at all. 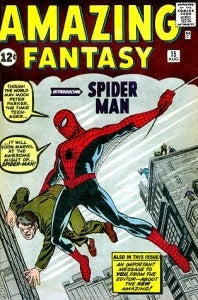 #3: Amazing Fantasy #15 Highest Previous Sale: $1,100,000 Current Auction Estimate: $1,100,000 Why It's Valuable:  Spider-Man graced the cover in 1962 in what would be the title's final issue, and the first appearance of the character, who would get his own title almost immediately. Sure, the $1.1MM sale was a CGC 9.6, and it was WELL above previous sale prices (according to Wikipedia, the previous high was less than $300,000).  But the market has been set, and that single sale put this book into another level of comic books. The comic is also one of the most-referenced single issues of all time, with film and cartoon adaptations being fairly slavish in their loyalty to the source material so far and the story's mantra ("With great power comes great responsibility") becoming not only Spider-Man's instantly-identifiable moral code, but fodder for pop culture references and jokes for years. 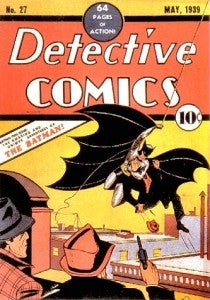 #2: Detective Comics #27 Highest Previous Sale: $1,075,000 Current Auction Estimate: $1,400,000 Why It's Valuable: The first comic book to feature Batman, Detective Comics #27 was published in May 1939. Really we could have estimated this higher, as the $1.075MM price was on a CGC 8.0.  A 9.0—virtually unheard of at auction—might make a handful of buyers go nuts. The CGC image at top features an 8.5-graded copy of the issue. In addition to being the first appearance of the beloved character, Batman's early Detective Comics appearances are notable for giving readers a rare look at a more brutal Batman, willing to use deadly force and even firearms (his hatred of guns, which goes hand-in-hand with his origin, was not established until later). In the post-Dark Knight Returns world, it's arguable that casual fans or people who come to comics through the movies would be as or more comfortable with this take on Batman as they are with the more modern interpretation. 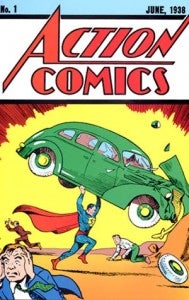 Highest Previous Sale: $1,500,000 Current Auction Estimate: $1,750,000 Why It's Valuable:  Published in June 1938, this is the mother of all comics.  The original appearance of Superman (also, the wizard Zatara) started a wave of superhero comic books. The previous high for this issue was a CGC 8.5.  A 9.0 should fetch a better price. This comic has not only intrinsic value, but perceived value as well; almost everyone knows that Superman is the first superhero, and so his first appearance is recognized even by people who know nothing or almost nothing about comics as the beginning of something remarkable. As with all of the books on this list, Action Comics #1 was published long before anyone perceived comic books as something that might have financial value in the future, so most of them were discarded and the ones that weren't, were often not treated with great care. What's heartbreaking about this particular book is that there are rumors that dozens of copies were reportedly thrown out or destroyed by the family of EC Comics publisher William Gaines in the '50s.