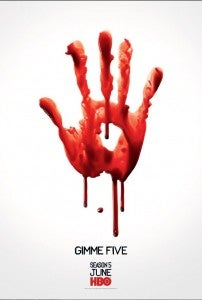 In advance of the fifth season of HBO's hit series True Blood, starting soon, the network released a new poster today. While previous season five teaser posters had featured individual characters, this one's more iconic and abstract, with a bloody handprint and the caption "Gimme five". True Blood returns to the air in June, but a new, ongoing comic book series set in the world of the show launches this month from IDW, written by Green Arrow scribe Ann Nocenti along with Alan Ball, the show's co-creator who exited as showrunner back in February. Deadlocked, intended to be the second-to-last Sookie Stackhouse novel by Charlaine Harris, also just hit bookstores last month, along with the third volume of IDW's comic book miniseries, The French Quarter, now in hardcover.