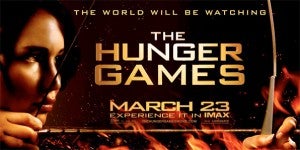 Yesterday, someone mentioned that Lionsgate was absolutely bringing the heat with their marketing efforts for 'The Hunger Games.' And today, the studio accelerates their marketing plan with the release of two new TV spots. In case you haven't read the Suzanne Collins bestseller, 'The Hunger Games' takes place in a world called Panem. It's post-war United States and The Capitol has taken control. The rest of the U.S. is divided into 12 Districts, which serve The Capitol. Each year, as a reminder of the failed revolution, The Capitol selects a boy and a girl from the 12 Districts—a total of 24—to fight to the death in a competition called the Hunger Games. Here are the new TV spots:

All of the marketing for this film has been targeted toward fans--readers--of the book/film. The spot with Haymitch (Woody Harrelson) comes a little--but not much--closer to telling the story to the casual filmgoer. But I think there needs to be a concerted effort to appeal to the folks that haven't read the book. So far, we haven't seen it. But I'm guessing that Lionsgate has that play in the playbook and they're about to run it. Let's see if I'm right.