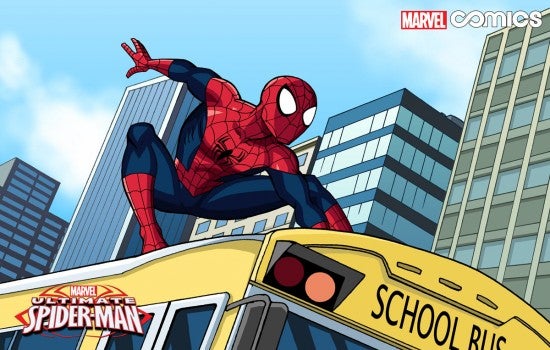 Today at SXSW Interactive, Marvel Comics announced that they will launch Marvel Universe: Ultimate Spider-Man Infinite Comics, a new, digital-first series that will see name creators take on short runs featuring Peter Parker as Ultimate Spider-Man, with art inspired by the Disney XD series. The series, which CBR reports will be the first all-ages Infinite Comic series, is schedule to run for 24 installments. The first six issues will be written by Eugene Son, #7-#11 by Matt Kindt, #12-#19 by Cullen Bunn and #20-#24 by Tim Seeley. The four writers worked together to build the larger story, which will be illustrated through storyboards by JL Mast and Geoffrey Beulieu, with finished art by Luciano Vecchio and Soutchey Leimetry. "Kids are used to videos, and the way stories are told on not just mobile device, but in digital and web in general, just take on a very different look and feel," Kristin Vincent, Marvel vice president of digital products, said. "We think this is the more comfortable format, it's an exciting format -- they're very dynamic, and almost have an element of animation to them." The comics themselves will reportedly be translated into more than a dozen languages and available digitally worldwide. "What we hear from around the world is that people are clamoring for localized content," Vincent said. "We take that very seriously. Not only do I think it's a good opportunity for Marvel, it seems like we have great stories that resonate around the world, and we're really proud of that. That's why in my mind it makes sense to start, especially with kids, with a character like Spider-Man, as opposed to a Captain America -- which hopefully also has worldwide reach, but obviously is a little bit different."