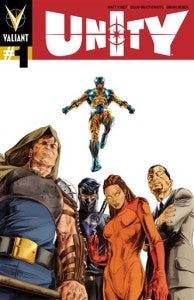 Valiant Entertainment hasn't been shy recently about the fact that Unity is coming in November. The first official teaser images were released last week and appeared to show Toyo Harada, Ninjak, Livewire and the Eternal Warrior facing off against X-O Manowar. Rather than a time-and-space-traveling crossover title--which was the nature of the original Unity, the company's first major crossover event in the '90s--the new iteration will be Valiant's first superhero team book, written by Mind MGMT's Matt Kindt and featuring art by Doug Braithwaite and Brian Reber, the publisher revealed today to the Associated Press. The art team signed Valiant-exclusive before taking on the project. "There's a reason Valiant never had a team like this throughout its history — these characters aren't friends," said Warren Simons, Valiant Entertainment's executive editor. "They don't hang out in the penthouse of a high-rise waiting for the Valiant-phone to alert them to trouble. These are hard men and women. They're dangerous and a lot of them are killers, and putting them in a room together is a violent proposition." And, as the teasers suggested, that violence will (at least at first) be directed at X-O Manowar, defeating whom is the team's stated objective. Ninjak and Eternal Warrior have already squared off with X-O in his own series, with the most recent issue revealing that X-O and Eternal Warrior once fought side-by-side when the immortal Eternal Warrior was posing as a Visigoth (which X-O actually is), but that he now opposes X-O in his attempt to "claim" a homeland for himself and a number of surviving members of his culture who were abducted by aliens centuries ago and only recently freed. "He's desperately trying to save what's left of his people, and he'll use force to achieve his goals. Toyo Harada — a child of the bomb — has dedicated his life to achieving peace by any means necessary," said Simons. "He will not view X-O Manowar trying to conquer Romania — which is an event at the heart of Unity— as a good thing. And neither will the Russians."