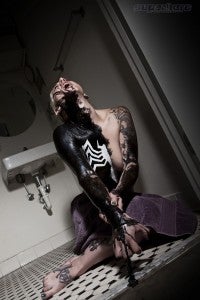 A Facebook photo showing a female model being "taken over" by the Venom symbiote has been pulled from Facebook, apparently for being too risque, according to Superhero Photography, whose photographer took the image. The image, which features model Freddie Nova and was taken by Adam Jay, is the third in a series of twelve photos taken during a photo shoot and uploaded to Facebook yesterday. Before it was removed by the social networking service, the photo had reportedly received 15,000 likes and been shared more than 5,000 times in less than 24 hours. "I wake up this morning to a little note from Facebook saying I needed to remove the Venom image (the one in the bathroom) as it violates it's terms and conditions," Jay wrote on his Facebook page. "Now I'm not sure if this is needed to be done on my personal page or this page, however I have no idea as to how this picture is offensive. Obviously there is someone out there who is a little pissed that it's getting a lot of attention. Just letting you guys know in case I go AWOL at some point!" The costume was applied using liquid latex, an approach that's become popular for Venom-themed photo sessions. Jay's photoshoot is at least the second such Venom to appear on Facebook in the last couple of weeks, both of the sexy, female variety and both featuring the liquid latex instead of a traditional cloth or vinyl costume. Jay's Facebook page has nearly 10,000 fans and is not limited to superhero photography of the "scantily-clad women" variety; he also churned out some of the first really great cosplay photos featuring Superman's New 52 costume not long ago. In response to the image being banned, Jay hinted that he may do a live Venom-in-liquid-latex photo shoot at his New York Comic Con booth in October.