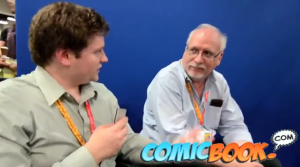 J. Michael Straczynski had a very busy weekend at the San Diego Comic-Con International earlier this month; in addition to announcing projects with Image Comics and Legendary Comics, he managed to squeeze in a little time promoting the Before Watchmen miniseries that he's writing for DC Entertainment, a controversial venture made only more controversial by Straczynski's own comments at a convention earlier this year.

Straczynski, the writer of Before Watchmen: Dr. Manhattan with artist Adam Hughes and Before Watchmen: Nite Owlwith Joe and Andy Kubert, was quoted at that show defending DC by comparing the "bad contract" that Watchmen co-creators Alan Moore and Dave Gibbons had signed in the 1980s to contracts signed by the likes of Jack Kirby at Marvel and, most provocatively, Jerry Siegel and Joe Shuster at DC. Many fans, who were already on the fence in terms of their feelings about the project, leapt on his comments and accused the writer of justifying "bad behavior" in the present by pointing to a precedent of "bad bevhavior" in the past, and expressed that his comments actually did more to vilify DC than to vindicate them. 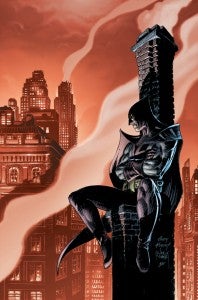 When we spoke to Straczynski at Comic-Con, though, he didn't back down from his sentiment that Moore got no worse a deal than dozens of other comic book creators have had over the years; in fact, he doubled down. Asked whether it was fair to compare Moore's absence on Before Watchmen to, say, Tony Isabella not being invited to participate in a relaunch of Black Lightning, the writer was unequivocal.

"It really is no different," Straczynski said. "I think that Alan loses the moral high ground when you look at the last ten, fifteen years of his career, and he's working with other people's characters--in League of Extraordinary Gentlemen, Lost Girls, on and on--almost creating slash fan fiction."

He added that while Moore defends his work on those public domain characters by saying that the writers in question are dead, "that's kind of the cowardly way to look at it. At least we're doing this while Alan is still alive and he can have a voice."

Of course, that argument has been key to much of the discussion of Before Watchmen, with many of the creators working on the project pointing to Lost Girls as an example of Moore abusing another writer's characters. Many creators, fans and journalists reject this argument, since public domain characters traditionally are subject to reinterpretation, where characters still protected by copyright are generally not.

He also accused the writer of pulling comic book fans into a contractual dispute. "And the contractual dispute has, to a degree, been misrepresented." He said that while a central issue in the Watchmen rights debate is that DC has kept the book in print constantly since its original publication, which prevents the rights to the work from ever reverting to Moore and Gibbons, that move was originally intended to generate royalties for the creators and was, until Moore and DC fell out, perceived as a good thing.

Straczynski said that Moore's claims that he didn't read, or didn't fully understand, the contract that he signed, ring false to him.  "When you go out and you buy a car, you read the contract," said the writer, and said of Moore's Watchmen claims, "Either he's lying, or he's an ass."

All controversy aside, reviews of the books have been so positive, and sales so high, that many fans and most of the comics press appear to have fallen in line behind the initiative, with many of its most vocal opponents giving up the ghost shortly after the stories started coming out in print. 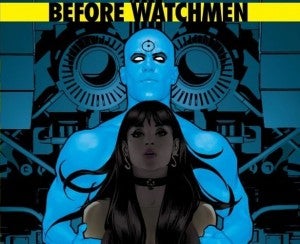 Even money is that about half of those were won over by the series while the other half just decided that it was no longer worth fighting a battle that had been lost, but before that happened, creators like Monkeybrain Comics co-founder Chris Roberson and Eisner and Harvey nominee Roger Langridge left Big Two comics altogether and dozens of editorials were written both inside and outside of the comics press questioning the decision to even launch the series.

When he was offered the job, Straczynski had no such hesitation. "Who do I have to kill?" was his answer when being asked whether he was interested in joining the project, which fellow Hollywood-to-comics transplant Kevin Smith reportedly declined involvement in. "They said, 'You have to kill Len Wein,' and I said that seemed fair," joked Straczynski. Wein, who was on hand for the interview, interjected with mock indignation. "I didn't," added Straczynski, "but I got the job anyway."

It's a job that he has taken to with relish, writing two characters who on the face of it, seem to exist at the poles of the story: Nite Owl is obviously incredibly vulnerable--a human with no powers, his weakness and fragility was a major part of his character in Watchmen. On the other hand, Dr. Manhattan is almost literally a god--he's Superman, but living in a world that is not the DC Universe, where there is no one there to challenge him.

"Part of the fun of the characters is, Dr. Manhattan is the most powerful character in the Watchmen universe," Straczynski explained, "but he can see all of his past and future decisions have already been made, so he loses free will in the process. He can't choose differently, because that's the way he chose."

At the other end of the spectrum, he says, "Nite Owl has the smallest point-of-view of all and sees a whole universe of possibility."

No conversation about Before Watchmen stays focused completely on the characters for too long, though; ComicBook.com pointed out that the writing teams were expected to essentially be above criticism in order to offset charges by Moore that the whole thing was a cash-grab by DC. The art teams, though, have received almost as much praise from critics and fans.

When asked whether he thought the all-star creative teams were put together in part to persuade the bookstore market and non-traditional comic book readers to try the series, he agreed that the whole idea was to make the quality above reproach, but added, "In every meeting I ever had with Dan [DiDio] about these books, he never mentioned the money aspect. He never mentioned how many we were going to sell of these things. He always said, 'Tell good stories about these guys.'...That's all he's ever said to us, and I think that says a lot for the guy."

A second installment, covering our conversation with Len Wein, will go live on Friday. You can check out our full interview on video at the bottom of the page, which includes some questions and a lot of asides and joking around that aren't included in either story. We also ran a previous Before Watchmen interview, this one not from Comic-Con, with Curse of the Crimson Corsair artist (and original Watchmen series letterer) John Higgins.

Thanks to Joe (what he asked to be called, but the reporter in me wouldn't let me call him that, and you can hear me struggling with it throughout the interview) for the use of the DC booth's couch, for which we were not cleared beforehand. You can check Joe's website, follow him on Twitter or "like" Studio JMS on Facebook for more from the writer.

The Jonas Brothers Just Challenged the Hemsworths to a Fight