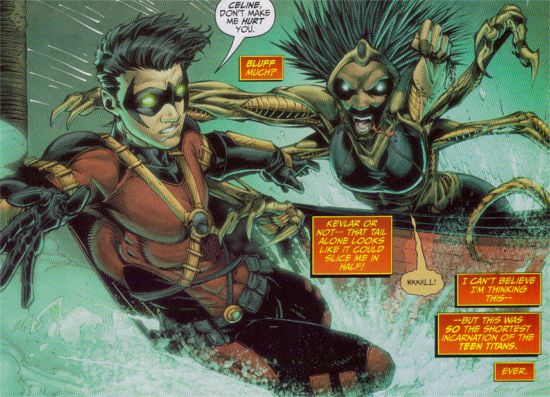 There has been much controversy over Teen Titans editor Bobbie Chase announcing at the New York Comic Con that the current Teen Titans of the new DC Universe are the first incarnation of the Teen Titans ever. Many fans were very upset that the past adventures of their favorite teen superhero group had been wiped from history. Or at least that was the story until Teen Titans #2 hit comic book stores today.

It’s now no longer clear if this current group of Teen Titans is the first and only Teen Titans of the new DC Universe, thanks to a thought made by Red Robin (a.k.a. Tim Drake). During a battle with Skitter, Red Robin thinks “I can’t believe I’m thinking this..but this was so the shortest incarnation of the Teen Titans. Ever.”

Were There Previous Teen Titans Incarnations In The New DC Universe?